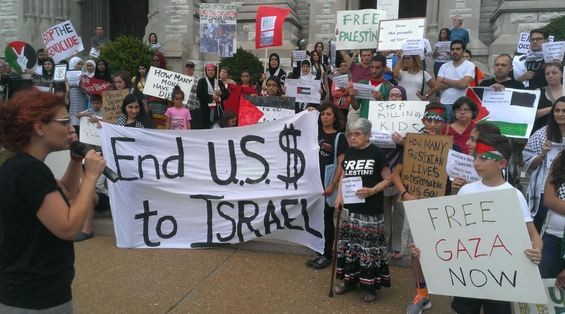 Two days before a panel discussion on Ferguson, Palestine and the Ayotzinapa student massacre was set to kick off, the event's host, the Missouri History Museum, handed the panel's organizers an abrupt ultimatum: Remove Palestine from the agenda, or find a new location for the event.

Organizers refused to budge, the event was canceled and about 100 people protested outside the museum last week to accuse the St. Louis institution of "silencing" Palestinian voices. The event was later rescheduled at a different location.

Though the museum disputes accusations that it engaged in censorship, emails obtained by Daily RFT show that on the same day officials canceled the event, the museum's president, Frances Levine, was fielding concerned emails from the Jewish Community Relations Council of St. Louis. Further email correspondence reveal the that the museum specifically pressured an organizer to eliminate Palestine from the discussion panel.

Last week, museum officials offered several explanations for why the March 19 event, titled "Ferguson to Ayotzinapa to Palestine: Solidarity and Collaborative Action," was too problematic for the museum to host.

A press release issued by the museum contended that the event was initially proposed without any mention of Palestine (the event was called originally called "From Ayotzinapa to Ferguson"), and that the addition represented a "significant change" to the terms agreed upon by the museum. Levine said she "recognized the complexity of the issue" of the Israeli-Palestine conflict and therefore directed her programming staff to review whether the event's format met the museum's standards.

Melanie Adams, the museum's managing director of community education and events, stated that it wasn't Palestine itself that was the problem, but rather any addition that "really diluted further from the original intent of program."

But emails obtained through a Sunshine request by St. Louis Jewish Voice for Peace clearly show that two local Jewish groups were disturbed by attempts to compare the Israeli-Palestinian conflict with the recent social upheavals in Ferguson and Ayotzinapa. These emails seem to have jump-started the process that would eventually lead to the event's cancelation.

In an email sent around 1 p.m. on March 17, Batya Abramson-Goldstein, executive director of the Jewish Community Relations Council, wrote to Levine that she was fielding emails and phone calls "expressing dismay at the upcoming History Museum program."

"I can understand the dismay," Abramson-Goldstein wrote.

Levine wrote back almost immediately: "Batya I will have to check with the programming staff. I don't know about this."

In her next email, Abramson-Goldstein thanked Levine and continued, "The conflating of the issues is disturbing. The parallels being made, likewise. The panel is seen as 'stacked.' The plan to base a documentary on the event raises the level of concern RE the harm this program may cause."

Later that same afternoon, Adams told one of the event's student organizers that she didn't know Palestine had been added to the agenda, even though it was her office that approved the "Ferguson to Ayotzinapa to Palestine" fliers on February 23.

"The conflict we are running into is the comparison between the events in Ferguson and the actions of the Palestinians," Adams wrote in an email to Sourik Beltran, the Washington University student who originally proposed the event.

Adams continued: "Some people see these events as comparing applies/oranges. I understand that you are presenting them as movements related to issues of social justice and how diverse communities can work together to achieve social justice for all people. There is concern that they might not be perceived that way."

Early the next morning, Adams relayed the result of her discussion with Beltran to the JCRC's Abramson-Goldstein.

By Wednesday morning, the event's description had been removed from the Missouri History Museum website.

Arielle Klagsbrun, a member of St. Louis Jewish Voice for Peace, believes the content and timing of the emails prove the Missouri History Museum gave in to demands from the JCRC.

"This is a trend we see in the mainstream Jewish community, where they try to talk about what's going on in Israel and Palestine as a nuanced situation, but they silence the Palestinian experience," she says. "The way the JCRC frames discourse around the issue of Israel and Palestine is to put focus on the Israeli perspective."

Abramson-Goldstein flatly rejects Klagsbrun's interpretation of the emails. She points out that she never explicitly asked the museum to cancel the event. She insists she was merely passing along concerns from her community.

"It's unfortunate and it's unnecessary," Abramson-Goldstein says of the continued controversy around the event's cancellation. "It's not helpful to the cause of Ferguson, which was ostensibly the motivation for this program. And certainly I think it's not helpful to understanding the Israeli-Palestinian conflict."

The JCRC wasn't the only Jewish organization that has previously expressed concerns about combining Ferguson and Palestine in one event. On March 18 Adams also emailed Karen Aroesty, director of the St. Louis chapter of the Anti-Defamation League, to inform her about the event's cancellation and upcoming protest.

"However the decision was made to cancel the program, I very much appreciate the allyship," Aroesty responded. "This is a tough time on so many levels, whatever you need from me, don't hesitate to call."

The ADL, an international anti-racism organization based in the U.S., has made no secret of its opinion regarding comparisons between Ferguson and the Israel-Palestine conflict. In a January op-ed, ADL deputy national director Kenneth Jacobson dubbed the comparison "the latest strategy being used by those who make a career of assaulting the good name of the State of Israel."

Aroesty tells Daily RFT that she didn't know about the event before Adams contacted her, but maintains "Palestine and Ferguson should not be conflated."

"I feel like the Palestine issue kind of hijacked the Ferguson issue and the Ayotzinapa issue," she says. "Each of them deserved special attention. That said, the capacity of the activist community to work together on issues they deem important, I find valuable."

Aroesty and Abramson-Goldstein say they their organizations are willing to work with the Missouri History Museum on a future program that focuses on the Israeli-Palestinian conflict, and the emails show that Adams reached out to both on March 19 to schedule a lunch meeting with Levine.

A museum spokeswoman said she didn't know which individuals or organizations would represent the Palestinian side in the future event.