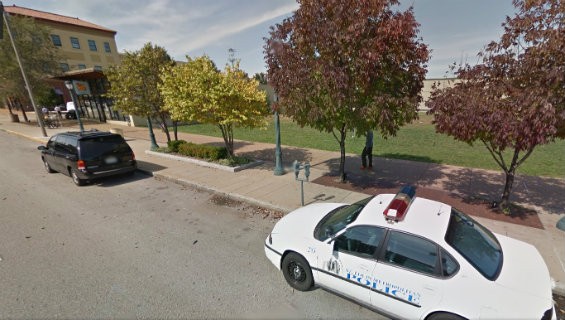 Two freelance photographers were in the Delmar Loop Saturday night to cover a Ferguson-related protest when they say a fifteen-year-old suspect took a shot at them.

"I saw it in his hands, I saw the muzzle flash when he shot at us," says James Cooper, a Kirkwood resident who has covered the protests extensively since this past summer. "I think we just happened to be at the wrong place at the wrong time."

The incident occurred at about 10:30 p.m., following a protest in the Loop during which activists marched in the street and closed down the busy intersection of Skinker and Delmar boulevards. However, the shooting happened after organizers had declared the action a success and demonstrators dispersed.

This guy chased down the shooter and did not kill him! REMOVED GUN. SEE @CoopFogg for pictures of the shooter. pic.twitter.com/OYMLgP1YwR

Throughout the demonstration, protesters repeatedly encountered large groups of agitated or excited teenagers, and rumors of fights rippled through the crowd. After activists declared the action complete and began walking to their cars, a crowd of young people remained at the Shell gas station on the corner of Delmar and Skinker until police officers ordered them off the lot and onto the sidewalk.

Cooper says he and a fellow photographer were late to the protest when they drove past a large group of teenagers arguing in a lot near the Pageant. Ten minutes after he got out of the car, Cooper says, a fight broke out and one of the boys pulled out a gun and started firing. Cooper says the boy looked right at him before shooting.

"The gun he had looked really crappy," he says. "It looked like he put it together from three different guns. Honestly, I'm not surprised he missed."

About 30 seconds later, a St. Louis Metropolitan Police officer arrived, and Cooper says he was able to point out the suspect.

"The cop made an incredible run across the field and caught the guy," says Cooper.

A pistol was recovered from the suspect. Cooper says his biggest takeaway from the experience was how well the police officer who made the arrest did his job.

"I gave him a pat on the back, asked him if he was going to try out for the Rams."

Here's the narrative from an STLMPD spokeswoman:

At around 10:45 p.m., officers were patrolling the 6100 block of Delmar when they observed a 15-year old black male firing a gun towards them. After a short foot pursuit, officers took the juvenile into custody. A gun was recovered. There were no injuries.