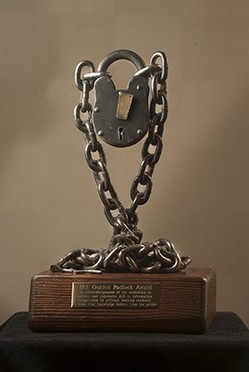 Open records can do amazing things. Just this week, Associated Press reporters used a combination of campaign records, vehicle records and Instagram to root out the shady expenses being billed by (now-resigned) Illinois congressman Aaron Schock. Here at Riverfront Times, we recently used Missouri's Sunshine Law to uncover troubling patterns in drug-offender sentencing. On the more mundane side of things, we benefit from the Sunshine Law every time we report from open government meetings.

Whether national or local, the various Sunshine laws represent versatile tools for opening governmental process to the masses, and so it makes sense that ten years ago the American Society of News Editors founded Sunshine Week, which kicked off on Monday.

However, Missouri's Sunshine Law regularly frustrates local advocacy groups and journalists. Not because of flaws in the law itself, per se, but because certain government agencies, legislative bodies and courts view compliance with the Sunshine Law as a mere suggestion.

So in celebration of Sunshine Week, we've compiled a list of Missouri's top six most transparency-averse governments, people and agencies.

Remember the time Brian Nieves threw a shit-fit at reporters from the Senate floor? More recent developments indicate that conditions in the Senate haven't improved much.

In past months, Progress Missouri -- a left-leaning advocacy group which supports Medicaid expansion and opposes so-called "right to work" legislation -- has been repeatedly barred from filming public Senate committee hearings. Republican lawmakers claim Senate rules allow for only accredited members of the press to film the meetings, but Progress Missouri rightly points out out that the Sunshine Law applies to everyone, not just journalists.

"Senate committees are public bodies as defined by the Sunshine Law, and committee meetings are public, open meetings," wrote Chris Grant, a lawyer for Progress Missouri, in a March 12 letter addressed to Republican senators Mike Kehoe, David Sater and Mike Parson. In the letter, Grant threatened the senators with legal action if they continued to block Progress Missouri from filming.

"We believe the Sunshine Law is very clear on this issue," Grant continued, "that members of the public, including representatives of Progress Missouri, have the right to videotape committee meetings whether or not they are official members of the press."

The Missouri Senate may dabble in shady bureaucratic maneuvering, but the lawmakers lack the inventive obstinance of Missouri's drug task forces. We previously reported how St. Louis funneled $200,000 in federal, state and local funds to a drug task force that it won't admit exists, even though budget and arrest records appear to say otherwise.

Aaron Malin, a researcher for marijuana-legalization group Show-Me Cannabis, has been chasing down information on drug task forces for years, but his recent efforts have been stymied by officials who brazenly maneuver to keep their records and meetings secret.

For instance, here's an excerpt from a report Malin published in February that chronicled his investigation of Missouri drug task forces. The report describes Malin's attempt to call the Northwest Missouri Interagency Team Response Operation, or NITRO:

First, I asked if I had reached the NITRO Task Force. The person on the other end immediately asked me to identify myself and who I was with rather than responding to my question. When I indicated I was trying to reach NITRO, he laughed and said, "Nope, this isn't it." He refused to identify himself or the building where he was located. After he referred me to another agency, I asked once again for the man to identify himself so I could tell the other agency who had given me their contact information. To my surprise, the man finally admitted I had indeed reached the NITRO Task Force.

While NITRO appears to employ the simple (but effective) tactic of lying, other drug task force officials have closed open meetings, levied high costs on producing records and, in some cases, denied their agencies are subject to the Sunshine Law at all.

Last year, a professional organization of journalists named Governor Jay Nixon as a co-"winner" of the Golden Padlock Award for his role in ensuring state executions remain shrouded in mystery. Though tongue in cheek, the award does reflect a growing worry that Missouri's execution process has become an ethical and legal mess.

On Tuesday afternoon Missouri executed Cecil Clayton, a former sawmill worker who lost a part of his brain when he was injured on the job. On one hand, there's concern that Missouri may have killed a man with severe mental illness and dementia. But the fact remains that we don't even know the composition or the source of Missouri's execution drug.

Missouri's death-penalty protocols have been in the headlines since 2013, when the European Union threatened to cut off supplies of a widely used pain medication if states continued using its drugs to kill people. Missouri turned to pentobarbital, a sedative officials obtain from a secret, unregulated compounding pharmacist. Several news organizations are suing the state to release its information about executions, and KWMU (90.7 FM) St. Louis Public Radio alleges Missouri is violating its own Sunshine Law by concealing its source of pentobarbital.

Many of St. Louis County's small municipalities have found an easy and effective way to block, delay and otherwise frustrate advocacy groups: make the information expensive as hell.

Better Together, a nonprofit that collects data on a range of issues in St. Louis County as part of a its broader research into city-county consolidation, revealed this week that it had to spend nearly $16,000 to obtain data from the county's municipalities and fire districts. Although state law does allow governments to charge fees for the cost incurred in fulfilling Sunshine requests, Better Together documented instances when one city charged $2,000 for information that another city provided for free. A request sent to Bellefontaine Neighbors took 85 days to fulfill, at a price of $770.90, while the same request in Pacific took 63 days and cost $1,082.64. Manchester demanded $800 upfront and still hasn't provided the information Better Together asked for.

"Citizens should not have to struggle to obtain information from the very governments designed to serve them," said Better Together executive director Nancy Rice in a press release. "To state what might be obvious: It's impossible to review the performance of a government if you lack information about the government."

Sure, Better Together was price-gouged by a significant number of municipalities, but Ferguson set a very high bar for secrecy in the wake of the fatal August 9 shooting of Michael Brown.

We now know Ferguson's police department had good reason to conceal emails and internal information from probing reporters. A U.S. Department of Justice report determined that police officials traded racist emails, and incident reports revealed officers' widespread use of force toward suspects who posed little to no threat. It's unclear if those details would have ever been revealed without the DOJ, since Ferguson officials effectively ransomed the information at ludicrous prices.

Various news organizations, including the AP and KWMU, filed grievances with Missouri's attorney general over Ferguson's high fees. Here's a brief highlight reel of the kinds of fees Ferguson was throwing around:

St. Louis County's many police departments and governments are clearly struggling to meet their obligations under the Sunshine Law. Yet, it's the much maligned municipal court system that appears to be the very worst offender. A St. Louis Post-Dispatch investigation published this week shows how court officials both flout and co-opt the state's Sunshine Laws to keep information secret from the public.

In their process of researching the rate at which municipal courts amend traffic tickets -- an indication of how often judges and prosecutors make deals to dismiss traffic offenses -- the reporters ran into heavy opposition. When the Post-Dispatch requested the records of dismissed traffic violations, court officials responded that the records were sealed under the Sunshine Law. In fact, the Sunshine Law only requires those records be sealed in the case of an arrest, not for traffic cases.

The Post-Dispatch even had trouble acquiring the courts' docket, which is the basic list of cases scheduled for that court session. Every court has a docket, and the document is usually public. It took the Post-Dispatch nearly a month to acquire the dockets, which included a blank page from Bellerive Acres and a list of three cases each from Greendale and Pasadena Park.

Read the entire Post-Dispatch investigation -- it's worth your time, as it demonstrates how a corruptive lack of transparency (and a lack of a well-enforced Sunshine Law) enabled self-serving lawyers and city officials to turn St. Louis county's municipal court system into a ethically debased embarrassment.