Update: Cecil Clayton died last night at 9:21 p.m. from a lethal injection. Continue reading for a statement from his attorney and Governor Jay Nixon.

Unless his attorneys are able to work some last-minute magic, 74-year-old Cecil Clayton will die tonight at 6 p.m. by lethal injection. This is despite the fact that he is missing about 8 percent of his total brain mass and 20 percent of one frontal lobe (as pictured above), and suffers from dementia. The Missouri Supreme Court ruled on Saturday that Clayton is mentally fit enough to be executed.

The accident that caused the brain injury occurred 24 years before Clayton shot and killed a sheriff's deputy named Christopher Lee Castetter, who was only 29 years old. Clayton shot him at point-blank range while he was seated in his patrol vehicle, his gun still in its holster.

Elizabeth Unger Carlyle, one of Clayton's attorneys, says that while Castetter's death was a "tragedy," Clayton is currently too mentally impaired for execution.

"The problem is that in this country we say that we only execute the worst of the worst. You can see there's a big hole in his right frontal lobe -- that's what controls impulse control and reasoning," she says. "He's just not tracking what really happening, what's going on, he's not able to respond well to it, or even be able to understand what's happening to him in any rational way. And that's just not the person that we ought to be executing." 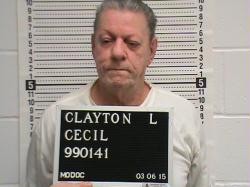 Clayton was a married father of five and a preacher before an accident in 1972 at a sawmill where he worked. A chunk of a log he was working on shot back and pierced his skull, causing shards of bone to enter his brain. A large piece of his frontal lobe had to be removed.

After that, Clayton's attorneys say, he became "depressed, impatient and prone to violent episodes." He was extremely anxious and suffered from hallucinations that people were following him. Eventually, his wife divorced him. A doctor who saw him in 1978 wrote that he was "just barely making it outside of the institution." In 1983, his IQ was measured at about 76.

Clayton shot Castetter in 1996 after the deputy responded to a call that Clayton was trespassing on an ex-girlfriend's mother's property. He told police afterward that Castetter "shouldn't have smarted off to me."

In prison, Clayton displayed signs of diminished mental abilities. His cellmates say he can't remember how to enter his pin at commissary, is impulsive and at times delusional:

Mr. Clayton believes his conviction, sentence, and execution is a conspiracy against him. He does not believe he will be executed. Rather, he believes divine intervention will set him free, so that he can travel the country preaching and singing the gospel.

Despite the fact that several different doctors who've examined Clayton over the years determined he is incompetent, Clayton has never had a hearing to determine that.

The Missouri Supreme Court denied a stay of execution on Saturday, writing that Clayton "shows nothing more than a man who suffers from some cognitive impairment but who understands he has been found guilty of killing the sheriff's deputy and has been sentenced to death for that act. Neither the fact that Clayton believes he should not have been convicted nor the fact that he believes he will be spared from execution is sufficient to make a threshold showing that he is incompetent to be executed." The decision against Clayton was 4-3, and a dissenting judge wrote that she believes Clayton is entitled to an intellectual disability hearing and that "the issue is not whether Clayton was sufficiently competent to assist in his defense or to be found guilty when he was convicted...the issue is whether Clayton is sufficiently competent today to be executed."

"This Court...rushes to reject his request for a hearing before a special master at which he can attempt to prove his incompetency claim," wrote Justice Laura Denvir Stith. "The majority's decision to proceed with the execution at this time and in these circumstances violates the Eight Amendment ban on cruel and unusual punishment."

"He's 74 years old, he's sort of lived a long, difficult life and all we're asking is he spend his last, final days in the maximum security prison and not killed by the state of Missouri," says Unger Carlyle.

For now, all she can do it wait. Clayton is scheduled to die tonight at 6 p.m. (He'll be the first inmate to be executed at this new, earlier hour -- previously all executions took place at midnight.)

Update: Unger Carlyle released the following statement after the Supreme Court denied her stay of execution petition, just minutes after he was given a lethal dose of Pentobarbital.

"Cecil Clayton had - literally - a hole in his head. Executing him without a hearing to determine his competency violated the Constitution, Missouri law, and basic human dignity. Mr. Clayton was not a 'criminal' before the sawmill accident that lodged part of his skull into his brain and required 20 percent of his frontal lobe to be removed. He was happily married, raising a family and working hard at his logging business. Medical experts who examined 74-year-old Mr. Clayton said he couldn't care for himself, tried but couldn't follow simple instructions, and was intellectually disabled with an IQ of 71. He suffered from severe mental illness and dementia related to his age and multiple brain injuries. The world will not be a safer place because Mr. Clayton has been executed."

My office has completed its review of the petition for clemency from convicted murder Cecil L. Clayton, and after due consideration of the petition and of the facts in this case, I am denying his petition. ... In addition to considering the nature of the crime, I have given extensive consideration to Clayton's competency. Clayton was found competent to stand trial in 1997 for the murder of Deputy Castetter and again in 2006 to bring his federal habeas action. In 2014, at the request of the director of the Department of Corrections, Clayton was comprehensively examined by a certified forensic examiner with the Department of Mental Health and determined to be competent to be executed. I accept that finding. This crime was brutal and there exists no question of Clayton's guilt. My denial of clemency upholds the court's decision to impose a sentence of death.