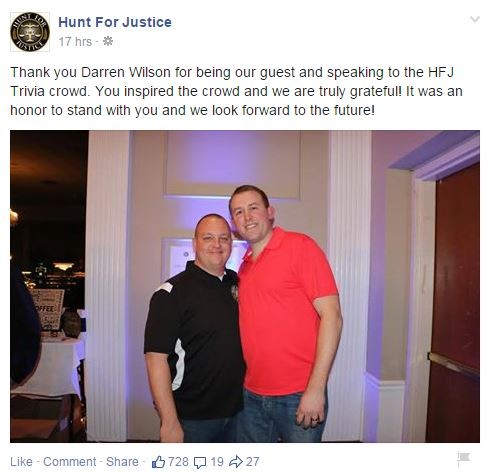 Hunt for Justice director Christopher Hunt, who is also an officer with the St. Charles County Police Department, tells Daily RFT that Wilson made some brief remarks to open the organizations' yearly gala. According to Hunt, there is no recording of Wilson's remarks, but Hunt says Wilson did not mention anything about Ferguson.

Although Hunt For Justice has contributed an undisclosed sum to Wilson's legal defense in the past, Hunt says the funds collected Saturday will not go Wilson, and that he was not compensated in any way for speaking. Hunt declined to provide a dollar amount for how much money was raised during the trivia night.

See also: DOJ Tells Michael Brown Family There Will Be No Charges for Darren Wilson

Both Hunt and Wilson know what it's like to face public scrutiny for their actions in uniform.

Hunt For Justice was founded in 2012, a year when Hunt found himself facing five years in prison on convictions for felony burglary, misdemeanor assault and property damage. The charges stemmed from a 2009 raid on a suspected meth cook's house. Hunt was accused of illegally entering the suspect's home and beating him. Hunt For Justice was initially founded to support Hunt in fighting the charges.

In 2014, the Missouri Supreme Court struck down Hunt's convictions for burglary and property damage, and sent the third conviction, for assault, back to Montgomery county for a potential new trial. Hunt remained employed with the St. Charles department throughout his appeal.

"We provide financial and emotional assistance to police officers in times of need. [The Saturday fundraiser] was for law enforcement wrongly accused in the line of duty, and we don't release the specific dollar amounts that we give to the officers," Hunt says. "Our organization did assist Darren Wilson."

According the group's website (which appears to be down since yesterday), the organization has assisted two officers who were charged along with Hunt in relation to 2009 raid, as well as a Springfield officer shot in January of this year. One page on the website included a statement of the organization's support for Darren Wilson:

Officer Darren Wilson was involved in an on-duty fatal shooting on August 9, 2014 in Ferguson, Mo which has resulted in him being placed on administrative leave pending the results of an investigation. Hunt For Justice supports Officer Wilson and stands with the Fraternal Order of Police in doing so.

Hunt For Justice is organizing a fundraiser for the family Officer Wilson of the Ferguson, Mo Police Department. He and his family need your help. Keep checking back here to get updates on dates and times of fundraisers for Officer Wilson.

On Monday, a photo originally posted to the Hunt For Justice Facebook page showing Darren Wilson and Hunt began circulating on Twitter. Washington Post reporter Wesley Lowery cited an attendee there who says Wilson was met with a standing ovation.

Per someone there: $25-a-head fundraiser that sat about 470 people. Darren Wilson entered to a standing ovation.

The fundraiser marks one of Wilson's few appearances since his sit-down interview with ABC's George Stephanopoulos in November, which aired the day after a grand jury chose not to indict Wilson for fatally shooting unarmed black teenager Michael Brown in August. Earlier this month, the Department of Justice similarly determined that the physical evidence and witness testimony did not support criminal charges against Wilson.

But that's the not the end of the road for Wilson or his supporters. Brown's family disputes Wilson's explanation that he feared for his life when he shot the teenager, and they are suing Wilson in civil court for the wrongful death of their son.