"Oh my God, it looks just like Star Clipper!"

Ben Trujillo was visiting 1319 Washington Avenue, where two long-time friends wanted to open a new comics shop, when he first noticed the similarity to his own store.

Trujillo and his wife, A.J., had just decided to close their venerated Delmar Loop comics shop Star Clipper, ending its nearly three-decade reign after years of struggling to recuperate revenue lost after the economic collapse of 2008.

Hoping to fill the void left by Star Clipper's closure, Steve Unverferth and Tony Favello, co-owners of Fantasy Books, Inc., purchased the store's fixtures for their Wash. Ave. store and even hired four of the Trujillos' former employees. Unverferth and Favello didn't have a name for their shop yet, but it was easy for Trujillo to see how this new store -- a long, narrow space with hardwood floors that had formerly housed an art gallery and a dojo -- could channel the spirit of its popular predecessor.

Until then, Trujillo hadn't seriously considered selling Star Clipper's name or branding along with its bookshelves and inventory.

"Our feeling was that we wanted to take it with us," Trujillo says. "We had built it up into what it was, and we didn't feel like there was anyone who could really pick up the reins."

But as any comic fan knows, the hero never really dies. As the Washington Avenue store took shape and as St. Louisans floundered over the loss of their favorite comic-book store, the Trujillos agreed on February 21 to keep Star Clipper alive by selling to Unverferth and Favello.

"We decided that St. Louis needed to have Star Clipper, and these are the guys who could do it," Trujillo says. "When you see the space, you'll understand. They're going to put their own spin on it, but I think they understand what made Star Clipper special, and they're committed to keeping it that way."

The resurrected Star Clipper Comics, Games and Collectibles, now owned by Fantasy Books Inc., will open in early April at 1319 Washington Avenue, with a grand opening scheduled for a couple of weeks later. That gives the store plenty of time to prepare for May 2, which is Free Comic Book Day.

Unverferth hopes that by reviving the Star Clipper name he's also resurrecting its role among comic fans and pop-culture enthusiasts as a hub for creativity and community, supported by a knowledgeable and welcoming staff.

"We want to keep that going," Unverferth says. The store will continue the artists signings, Comics University series and other special events it's known for, and even has two rooms where customers can play multiplayer games, such as Magic: The Gathering or Settlers of Catan, without interruption. 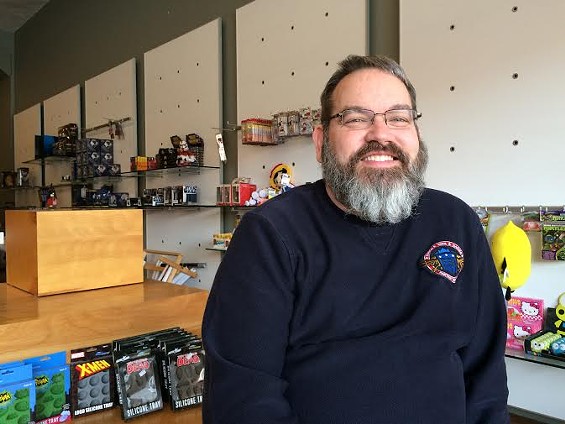 "We are providing a safe environment for people to do the things they love to do," Unverferth says.

Unverferth and co-owner Favello have been in the comics game since 2004, when they bought Fantasy Books Belleville, a store Unverferth had worked in part-time since 1996. The business partners bought two more comics and gaming stores in the Metro East: Fantasy Books and Games in Fairview Heights and Heroic Adventures in Edwardsville, before deciding to bring their comics empire across the river, locating on Washington Avenue across the street from a lighted parking lot on a block surrounded by trendy restaurants, a dog park and the incomparable City Museum.

"We are the little brother nobody talks about," says Unverferth. "Star Clipper, everybody talks about. We try to do the same thing over on the Illinois side. So we decided we just had to buy big brother."

So if Star Clipper is coming back, why did it have to die in the first place? The owners explain, on the next page. Star Clipper has been dropping a few hints at its superhero-style rebirth online:

Post by Star Clipper.
Trujillo admits the timing of Star Clipper's rebirth may seem cliche to comic book fans wary of Superman-style resurrection tropes, a marketing ploy to drive readership to the superhero's "last" issue. Indeed, in a January 21 cover story, the Riverfront Times wrote that for Star Clipper, "there is no miraculous regeneration in the near future, no alternate dimension from whence the shop will emerge stronger than ever just in time to celebrate another Free Comic Book Day."

Turns out, there is an alternate dimension for Star Clipper to emerge victorious for Free Comic Book Day, and that dimension is Washington Avenue.

"We never meant to fool anyone," says Trujillio, adding that he decided a month after that RFT feature story to sell the name. "It was a very natural evolutionary progress."

Unverferth adds: "Our feeling was, it still could be very meaningful to bring it back."

Meaningful, indeed -- especially to the Star Clipper supporters who crowded the store in its "final" two months to mourn their loss. Trujillo said the outpouring of grief from customers took him totally by surprise.

"I expected there to be some outpouring, but the degree and level and volume, they really exceeded any expectations I had," Trujillo says. "I know all the metrics about the store. I know all the regular customers we have, I know how many people are in our database and how many people shop with us multiple times a year. But how attached such a huge proportion of those people were to the store was a surprise. You can run the numbers, but their emotional attachment to the store was more difficult to judge."

Before the deal to sell Star Clipper was inked, Unverferth says he and co-owner Favello were having a hard time picking a name for their store.

"We had a whole long list of names," Unverferth says, listing St. Louis Comics and Washington Avenue Comics as two potential options. "Nothing was exciting. Nothing was really fitting in."

"One of the things that Star Clipper was and being in a location like where you're going to be on Washington Avenue, you have to be open to the casual person just waiting down the street," Trujillo says. "And if you're called Arch Nemesis, they're not going to know. I mean, Star Clipper? They're not going to know either. They might think it's a hair salon. But Arch Nemesis, I think, comes across as too weird and nerdy."