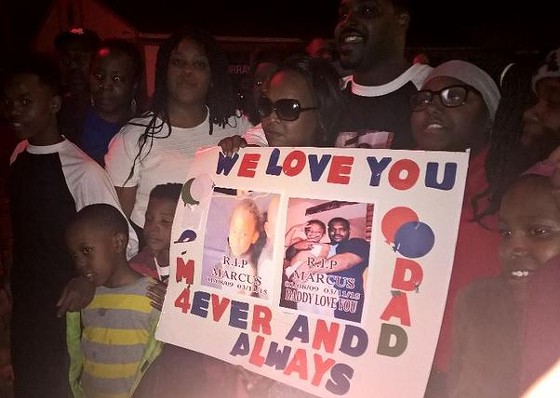 An inexplicable shooting took the life of six-year-old Marcus Johnson on Wednesday last week. Now, the kindness of strangers will allow the grieving family to lay their son to rest for the last time.

St. Louis alderman Antonio French ably summed up the city's stunned reaction to the boy's death, tweeting on Saturday that "6-year-olds shouldn't die like Marcus Johnson did" before asking the public to help with funeral expenses. French set up a GoFundMe campaign, and 24 hours later it surpassed its $5,000 goal.

"It's touched so many people, for a young innocent child to die like that in our city," French tells Daily RFT. "We have a problem with violence in our city, and people are sick of it."

Marcus Johnson was seated in his parents' minivan when he became city's 24th homicide of 2015. The family was on their way home after hours spent relaxing in O'Fallon Park.

Diagnosed with a heart disease at birth, Marcus was recovering from surgery he'd endured the previous week, and earlier that Wednesday his father had taken him to get blood work done at Cardinal Glennon Children's Medical Center. For the Johnson family, the park outing was meant to be a pleasant reprieve from the stresses of Marcus' medical treatment.

Yet a seemingly minor parking disagreement between Marcus' father, Marcus Johnson Sr., and another man who wanted Johnson to stop blocking the street with his minivan, may have set into motion the events that left Marcus dead. Johnson's wife, Quiana, told the St. Louis Post-Dispatch that the man who had argued with her husband appeared angry as he left the scene.

"He had the devil in his eyes," she said.

A vehicle followed the Johnson minivan as it left the park, and suddenly bullets began shattering the minivan's windows. Quiana grabbed her gun and handed it to her husband, who returned fire. Bullets struck Marcus, and the gunfire also injured his teenage brother and a 69-year-old man.

They pulled off onto a side street to escape the gunfire and called the police, the Post-Dispatch reported. Police officers rushed him to Barnes-Jewish Hospital, but the doctors' attempts to save him failed.

News of Marcus' death shocked St. Louis for its brutality and association to gun violence, but it was a blog post written by St. Louis police officer Don Re, titled "A senseless death...", that lent rare perspective to the tragedy. Re was one of the officers who attempted to save the little boy, and his reflections, at times bitter, raw and profane, quickly went viral. The blog post was shared thousands of times.

"EMS was coming," Re wrote, describing the officers' decision to drive Marcus to the hospital themselves, "but they were too far away. It was too risky to wait for them, so we raced that little guy to the hospital in record time. We had all sorts of cars shutting down the route to the hospital, just like we would were a fellow cop shot and in need of medical care. That's about the highest honor we can give a person, and this boy deserved it. Still, it didn't matter on this night."

Police are still investigating the shooting, and Marcus' parents are calling on their son's killer (or killers) to come forward.

"Turn yourself in, this madness must end" Parents of li'l #MarcusJohnson lead March after Vigil in STL #Ferguson pic.twitter.com/Wndc5vxHug

Alderman French tells Daily RFT that he will be shutting down the GoFundMe campaign today so that the money can be transferred in time to pay for the funeral. With more than $12,000 raised, French says, the extra cash will go the family, and the the funds will likely assist with repairing their bullet-riddled minivan and chipping away at medical bills.

"I hope Marcus' death will spark a change," French says, "to call people to action to help decrease the violence, but also to make people who are quick resolve disputes with weapons realize that there can be very awful consequences. That regardless of who you're aiming at, these bullets are taking innocent lives."

Marcus' funeral will be held at 1 p.m. Thursday at Ronald L. Jones Funeral Chapel. Anyone with information about the shooting should call CrimeStoppers at 866-371-TIPS.