What To Expect When Construction Begins on Delmar Loop Roundabout, Trolley 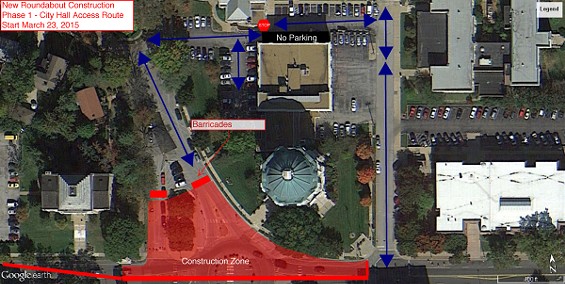 With fewer than two weeks before construction starts on the long-debated Loop Trolley, project organizers released details Wednesday about what drivers and pedestrians can expect.

Construction on the $43 million, 2.2-mile trolley line connecting the Delmar Loop with Forest Park begins March 23 with the installation of a permanent roundabout at Trinity Avenue and Delmar Boulevard.

The roundabout on the west end of the Loop is designed to improve traffic flow in and out of the popular Delmar Boulevard business district, which was named by the American Planning Association as one of the ten greatest streets in America. The roundabout will sit between University City's famous Lion Gates, two pylons topped with a sculpted lion and tiger in 1909, before Delmar Boulevard was a paved road.

In case you're not so familiar with the west end of the Loop, here's an interactive map before we get started:

Workers will spend twelve weeks (or until mid-June) installing the roundabout, six weeks on the north side and six weeks on the south side, according to organizers. Workers will begin laying the trolley track in late May, starting near Kingsland Avenue. Cars will still be able to drive through the Loop during construction.

Traffic heading west on Delmar Boulevard between Sgt. Mike King Drive and Trinity Avenue will be redirected south of the temporary roundabout during construction. The road will still be open for two-way traffic.

Trinity Avenue north of Delmar Boulevard will be closed, and parking for University City City Hall will be accessible via Sgt. Mike King Drive, east of city hall.

Officials expect the trolley to be ready for testing in mid-2016 and to be open for the public in late 2016.