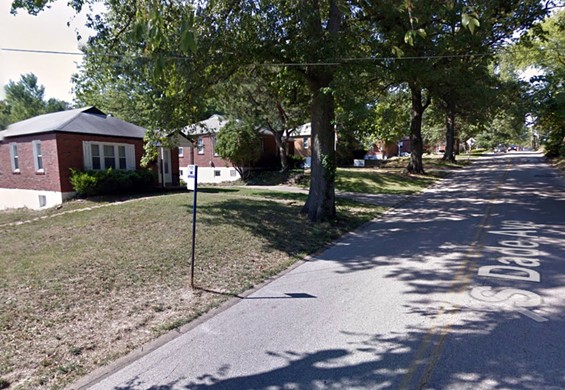 A police tactical team raided a home in the area of Tiffin and Dade avenues this morning and several people were taken in for questioning. St. Louis County Police spokesman Sergeant Brian Schellman confirms that the action is related to the search for the gunman who shot two officers outside of the Ferguson Police Department early this morning.

Post-Dispatch reporter Kim Bell began tweeting images of the raid just after St. Louis County police chief Jon Belmar wrapped up a news conference about the status of the two policemen. He declined at that time to talk about the investigation, saying he had not yet spoken with his detectives on the scene.

Schellman tells Daily RFT that so far the people taken in have not been arrested. This article will be updated throughout the day as we learn more.

This map shows the distance from the raided house to the Ferguson Police Department where the shooting took place:

An hour earlier, a neighbor saw police bring two men and a woman from the home in handcuffs.