Ferguson Protesters to Police: Shooter Was Not One of Us 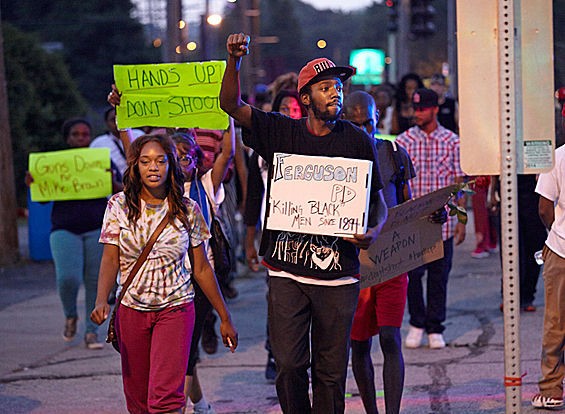 As police search for the gunmen who shot and injured two St. Louis-area police officers at a Ferguson protest Thursday morning, activists are pushing back against police statements that the shooters were "embedded" or associated with peaceful protesters.

"I have said all along that we cannot sustain this without problems," Belmar said early Thursday after the shooting. Belmar said it's "a miracle" that gunfire hasn't wounded officers before now. "That's not an indictment on everybody that's out there certainly expressing their First Amendment rights. We've seen in law enforcement that this is a very, very, very dangerous environment for the officers to work in, regarding the amount of gunfire that we have experienced up there."

Rasheen Aldridge, the youngest member of the Ferguson Commission and an organizer with Young Activists United St. Louis, says the shots that injured the two officers didn't come from the group of protesters he stood with.

"I know it's a tough situation for the police," Aldridge says. "I hope in they can find a way to keep themselves safe but to also keep the protesters safe. We're not the ones out here with the guns."

The ringing of gunfire has often provided the sinister soundtrack to the Ferguson protests, especially in November during the violent, fiery protests following a grand jury's decision not to indict former Ferguson police officer Darren Wilson for the fatal August 9 shooting of Michael Brown. On August 12, Mya Aaten-White was shot in the head while walking back to her car near Ferguson's burnt-out QuikTrip after a protest.

Police officers guarding protests are vulnerable to being ambushed, especially in a city where gun possession is rampant and antagonism against law enforcement is at a fever pitch. In August, Missouri Highway Patrol Captain Ron Johnson accused reporters of threatening police safety by leaving the media corral against police orders to take pictures of a car before officers could secure two guns inside.

Belmar said the shooters were "embedded in that group" of protesters outside the Ferguson Police Department Thursday morning, and later said there is an "unfortunate association" between the gunmen and protesters.

Tony Rice, a Ferguson activist, said there's no connection between the gunman (or gunmen) and the protesters -- other than the fact that the shooters used protesters as cover.

"I will put my protest life on the line that when they find the shooter, he's never even been to a protest," Rice tells Daily RFT. Rice says after seven months of protesting in front of the police department, officers know the regulars from the instigators. "We don't even walk that far up on Tiffin (Avenue, where the shots came from.) We don't even walk up there, and we've been here seven months." 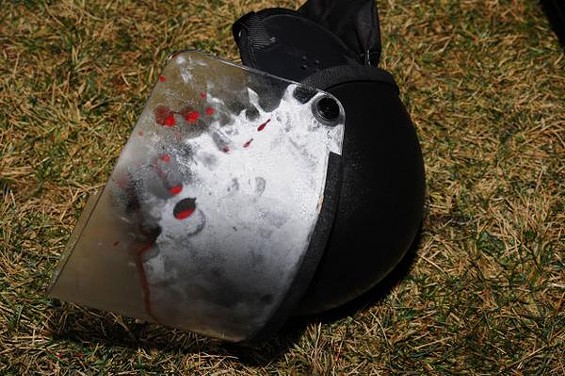 Protesters, local officials and journalists all denied that the shots came from someone "embedded" within the otherwise peaceful protesters.

Embedded with protesters???? I'm at the scene and police are concentrated at the top of the hill on Tiffin. That is far behind protesters

Belmar said that the shots came from somebody that was "embedded" with protesters. That's a lie and the video shows that it's a lie.

The shots were fired from up the street behind where we were protesting. This person is not a part of our group #Ferguson

From everything I could tell, the shots came from up the side street. Not from the group of protesters. Please pray for the officer.

EVERYTHING I have seen and heard from eyewitnesses is the shots did not come from protesters.

So far, it's unclear how last night's shooting will change the dynamic between police and protesters. Belmar said he plans to re-examine the security plan for protests at the Ferguson Police Department and come up with a proactive -- instead of a reactive -- plan.

"I feel very confident that whoever did [the shooting] was there for the wrong reasons, not the right reasons," Belmar said.

But Belmar's statements that the shots came from someone "embedded" among protesters frustrated activists who've remained peaceful during protests.

There are some who have been waiting for any moment to attempt to vilify and discredit protestors. But the shooter did not stand w/ us.

The idea that their actions represent the protest movement in any way or as a whole is a twisted straw man perpetuated by racists.