A Racist Stunt Got SAE Suspended from Washington University in St. Louis, Too 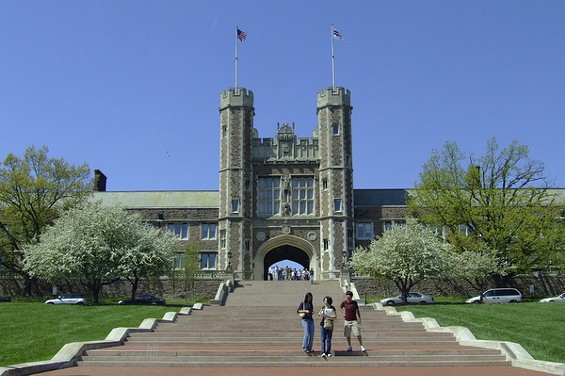 It's not just Oklahoma.

Two years before the University of Oklahoma shut down its Sigma Alpha Epsilon chapter over a video of fraternity members singing a racist chant, Washington University did basically the same thing.

And it started, as all university scandals do should, with a photo scavenger hunt.

A group of SAE pledges, members who haven't yet been initiated into the fraternity, entered the Bear's Den dining hall around dinnertime in February 2013 looking for a place to take a photo of a fraternity member facing a wall in a public place, one of the scavenger hunt's requirements. The pledge posed behind a group of black students eating dinner in the dining hall, and fraternity members took the photo without offering the students an explanation.

From a tipster, who described the scene in an email to BroBible.com:

One of the girls sitting at the table yelled out to them, "Did you need us to pose?" All of the boys ignored her and walked away. Stunned, a few guys from the table followed them to the grill and asked if they had taken a picture of us. They claimed to be taking a picture of something behind us (which only happened to be a black worker and a large window) for a scavenger hunt.

About half an hour later, the group of fraternity pledges returned. One pledge began reciting the lyrics to Dr. Dre's "Bitches Ain't Shit" (another scavenger hunt requirement) to the black students as though it were slam poetry while other fraternity members filmed on their phones and asked the students to "show some respect" for the performance.

Snoop Dogg and Daz Dillinger repeat the N-word five times in "Bitches Ain't Shit." During his impromptu performance in the Washington University dining hall, the SAE pledge did, too.

As [redacted] continued to recite the lyrics, he came across the word "nigga" and said it with no hesitation. One of the black students tossed an empty bottle at him in anger, only to be told by the group that it was part of the song, so it was okay. The black student replied that it was still offensive, and the group apologized half-heartedly. One member of the group suggested that they shut down the show early.

Soon after students reported the incident to campus officials, vice chancellor for students Sharon Stahl launched an investigation into the incident and suspended SAE from campus.

"This type of action is detestable and completely unacceptable," Zissman wrote. "I apologize personally and on behalf of my fraternity, and promise you this will NEVER happen again."

The fraternity later suspended members in charge of its new-member education program and apologized for its "immature" actions.

Wash. U. investigated the incident and required SAE to make some big changes before the chapter was reinstated.

"Washington University's SAE chapter is active, in good standing, and under no sanctions from the university," says Julie Hail Flory, Assistant Vice Chancellor for Campus Communications. "Following a 2013 incident, the university halted chapter activity to allow for a thorough investigation and adjudication of the incident. Based on the outcome of the investigation, the chapter was allowed to resume operations only after the fraternity was disciplined, chapter leadership was removed and the chapter participated in a series of educational programming."