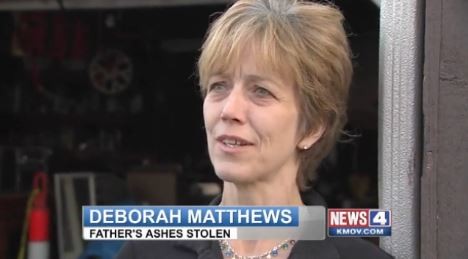 If television and movies have taught us anything, it's that the urn of a cremated loved one is a hilarious mishap waiting to happen.

In November, the well-worn trope became reality when three teens broke into a St. Peters home and made off with the wooden box containing what remained of the homeowner's father. Thinking the powdery substance was cocaine, one of the boys tasted the mixture.

Police arrested the culprits last week, but the story didn't end there. Now -- in a development that threatens to blur the line between real life and whatever reality Keith Richards lives in -- the victim of the burglary claims that two of the teens were grandchildren of the very man whose cremains they mistook for a pile of drugs.

Police have released the name of one of the teens arrested, 17-year-old Devin M. Gesell, who is facing charges of burglary and two counts of theft. His unnamed juvenile accomplices, aged 15 and 16, were referred to the juvenile authorities, police say.

In an interview with KMOV (Channel 4), Debora Matthews revealed that she believes the unnamed teens are actually two of her father's grandchildren.

Matthews further theorized that the theft of her father's ashes could be attributed to the teens being "just stupid."

According to police, the accused burglars broke into Matthews' home through a rear door. The three were acquaintances of Matthews' family, and they allegedly planned the caper after seeing a Facebook post announcing that the family was going out of town. Gesel told police he acted as lookout while the other two snatched an Xbox 360, cash, jewelry and prescription bottles of oxycodone and morphine. They also grabbed the box of ashes, which, following the ill-fated taste taste, was unceremoniously thrown from window of their getaway car as they cruised down a highway.

Clearly, these three teens have a lot of growing up to do. It might also be a good idea to consult the Dude to discuss proper cremain-disposal etiquette.