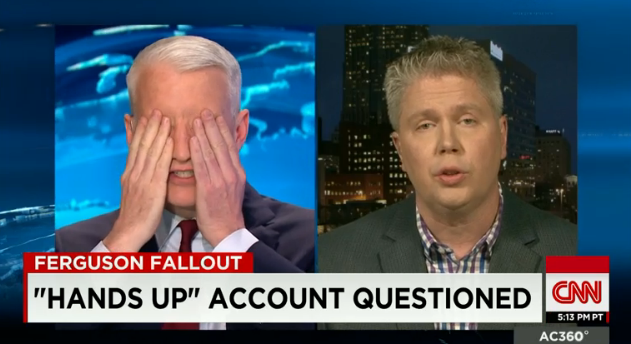 The U.S. Department of Justice's scathing 102-page report on racial bias in Ferguson is basically the soggy tortilla that splits open after one bite and spills piping hot carnitas all over your lap.

Roorda went on the show to talk to Cooper after the justice department released two reports related to the fatal August 9 shooting of Michael Brown. One report cleared former Ferguson police officer Darren Wilson of any civil rights charges related to the shooting, saying it's likely Wilson feared for his life when pulled the trigger. The second report detailed disturbing (though not unexpected) allegations of racial bias and discrimination within Ferguson's police department and court system.

During his interview with Cooper, Roorda was reluctant to address the report on Ferguson police overall, focusing instead on how the justice department's report on Wilson said it's unlikely he shot Brown while his arms were raised in surrender.

"We got a justice department burrito where the meat of the report -- that Darren Wilson was innocent of the charges against him -- was wrapped in this flimsy tortilla of accusations of racial bias by the Ferguson police department," Roorda says in the interview, which you can watch here: Both Cooper and his other guest, former special advisor to the president Van Jones, balk at Roorda's characterization of the extensive report, which backs up its allegations with statistics and more than 30 testimonials.

When Jones tries to push back against Roorda's statements, asking how racist emails circulated by Ferguson police and court officials, is "flimsy," Roorda takes a stand.

"Van, you get to be on the news every night and be wrong," Roorda says. "Let me be on one night and be right about what happened."

Cooper eventually gets Roorda to admit that the "flimsy tortilla" report unearthed important and unsettling truths about Ferguson, including its profiteering courts system and unwarranted search rates targeted at blacks.

Cooper asks Roorda why Ferguson Police Chief Tom Jackson, who "is running away like a cockroach," still hasn't addressed the report publicly, prompting Roorda to speak his most honest sentence from the entire interview.

"I don't know what that's about, Anderson, I really don't," Roorda responds.