In an extremely brief appearance Wednesday night, Ferguson mayor James Knowles responded to the damning U.S. Department of Justice report on the practices and procedures of the town's police department. The press conference was supposed to include remarks from Chief Tom Jackson, but a spokesman for the city told reporters at the last minute that Jackson would not be there after all. The mayor took no questions.

Much of Knowles' statement rehashed ongoing efforts to reform the city's courts and ticketing systems, but there was some news: The three police department employees responsible for racist emails uncovered by the DOJ were placed on administrative leave on Tuesday, and one was fired Wednesday. Knowles also highlighted the fact that three African American women have been hired to fill positions in the city jail and courts, and the city is hiring three new police officers. He did not, however, comment on whether the city will enter a consent decree with the DOJ, promising to reform police department practices.

Former mayor Brian Fletcher, who was at the press event, told Daily RFT that he'd spoken to city manager John Shaw. According to Fletcher, Shaw indicated that the city would not fight the DOJ's recommendations and characterized them as "reasonable requirements the city can honor." 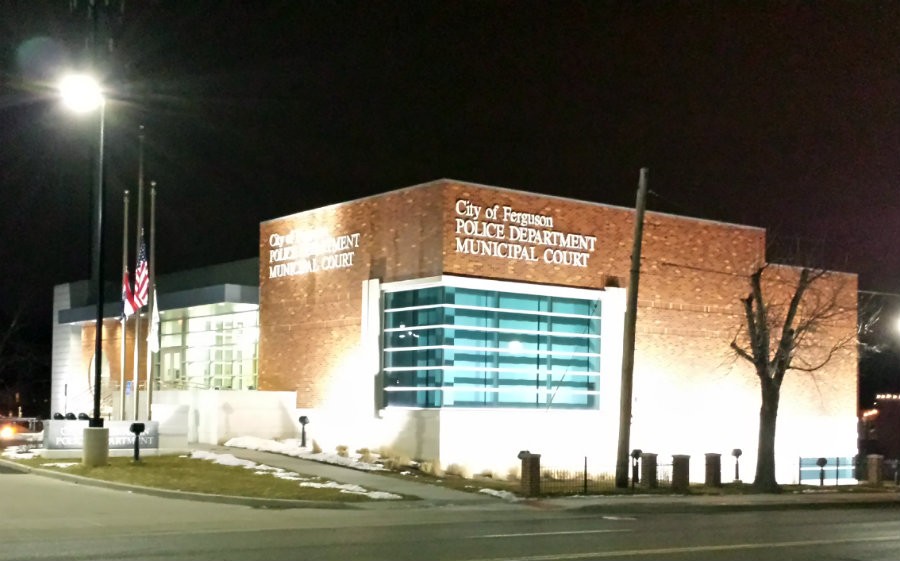 Knowles' statement also touched on the formation of an "Explorer Program" with the Ferguson-Florissant School District to get kids interested in police work and that a DOJ-recommended consultant will perform a patrol staffing and deployment study. There was no mention of the 30 or so anecdotes included in the DOJ report that seemed to show police officers infringing on citizens' First Amendment rights, arresting people for frivolous reasons and/or using excessive force when doing so. U.S. Attorney General Eric Holder called some of the policing practices used by the Ferguson department "unconstitutional" and "dangerous."

Knowles did not answer when reporters shouted after him whether the city will enter a consent degree with DOJ. Ferguson committeewoman Patricia Bynes was unimpressed.

"To discuss what's already been done and already put in place and is not enough -- what's the point?" she said. "That's nice to know. But this did not tell us anything."

Jefferey Small, a spokesperson contracted from Little Communications Group for the city and the police department, said that they would "re-assess" whether to make Chief Jackson available at a later time.

"I think it's fair to say part of moving forward from here is to determine what, if any, changes the city will go along with and agree to," he said. "Some changes could involve positions -- changes in positions."

Fletcher, who is also chairman of I Love Ferguson, said the city is still going over the DOJ's recommendations with a "fine-tooth comb" in order to figure out the logistics of making changes, and how they will be paid for.

"I don't think they asked for the police chief's head," said Fletcher.

I am James Knowles, Mayor of the City of Ferguson.

The 100 page document outlined five specific areas of concern in which the Ferguson Police Department engaged in a pattern or practice of unlawful conduct that violates United States Constitution and federal law.

Immediately upon leaving the meeting the three individuals were placed on administrative leave pending an investigation. One has since been terminated and the other two are still awaiting the outcome of an internal investigation.

The actions taken by these individuals are in no way representatives of the employees of the City of Ferguson.

Today's report allows the City of Ferguson to identify problems not only in our Police Department but in the entire St. Louis region. We must do better not only as a City, but as a State, and as a Country. We must all work to address issues of racial disparity in all aspects of society.

As mentioned by the Department of Justice, there are several initiatives that already taking place in the Ferguson Police Department, they are as follows:

-- The Ferguson Police Department is in the process of hiring three new officers. We hope to have an update on the positions and racial make-up of the hires sometime next week.

-- The Ferguson Police Department has hired one Corrections Officer since August 9, 2014. One African American female was hired for that position from a pool of 91 applicants.

-- The Ferguson Police Department has hired two Assistant Court Clerks since August 9, 2014. Both positions were filled by African American females, from a pool of 64 applicants.

-- The Ferguson Police Department began an Explorer Program in the Ferguson-Florissant School District in January, 2015. The goal is for Officers to engage with Youth and to recruit them for future Police Officer positions.

I have also convened a task force made up of residents, businesses, and law enforcement to create a Civilian Review Board that will review complaints and provide citizen input into Ferguson Police policies and procedures. The task force meets weekly and its efforts are already underway. This groundbreaking initiative will be one of the first of its kind in the region.

Lastly, The City of Ferguson has retained the services of an independent consultant recommended by the Department of Justice to conduct a patrol staffing and deployment study.

Finally, I would like to speak briefly about our efforts to reform the Ferguson Municipal Court.

In addition, there is no longer a separate offense for "Failure to Appear" which would now eliminate certain additional fines and costs for individuals in the court system. Pending charges of failure to appear which were issued prior to the reforms are being dismissed as they come before the Municipal Court.

Finally, the Municipal Court Judge has also implemented new procedures and programs. A new docket was established specially for those who have had trouble paying fines; a defendant may appear and speak to the judge and/or prosecutor about different payment plans or alternative sentencing.

The City has also passed an Ordinance in September of 2014 to cap municipal court revenues at 15% of the City's overall budget, which is half of the legal limit allowed by Missouri Law. This Ordinance also specified excess revenue from municipal court will be appropriated for projects that will benefit the community.

THESE ARE JUST SOME OF THE INITIATIVES THE CITY OF FERGUSON HAS TAKEN AND WILL CONTINUE TO TAKE, TO MOVE THIS CITY...RESIDENTS AND THE ENTIRE COMMUNITY FORWARD.

Correction: A previous version of this post said that three "officers" were disciplined for racist emails and one was fired -- there is not enough information currently available to say whether or not the police department employees disciplined were officers or not. We regret the error.