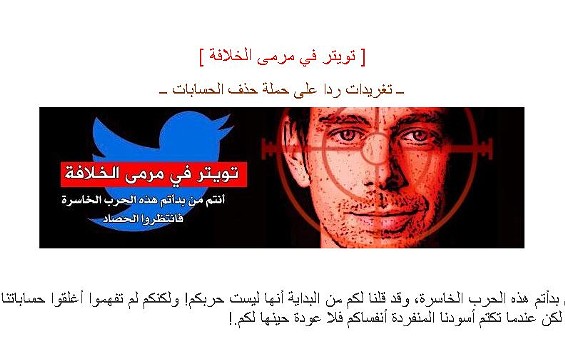 As Twitter continues to shut down accounts belonging to supporters of the Islamic State, the terrorist group is fighting back by threatening to kill Twitter co-founder and St. Louis native Jack Dorsey.

A pro-ISIS group called on followers to target and kill Dorsey and Twitter employees in retaliation for the social-networking site shutting down accounts ISIS uses to communicate with and recruit new followers. The online threat, posted on the anonymous website Pastebin, is illustrated with a digitally altered image of Dorsey in the cross hairs of a gun.

"Your virtual war on us will cause a real war on you," the threat reads, according to a translation from BuzzFeed. The message continues, "You started this failed war. We told you from the beginning it's not your war, but you didn't get it and kept closing our accounts on Twitter, but we always come back."

The full message, which Daily RFT roughly translated from Arabic using Google Translate, mentions Dorsey by name five times. After one day online, the message has more than 7,800 views.

"Jack helpless when their necks officially become a target for the soldiers of the Caliphate and supporters scattered among your midst," the message says.

ISIS relies on Twitter and YouTube to spread its message of death and destruction to a worldwide audience. Last month the terrorist group tweeted a video encouraging followers to stage lone-wolf attacks in the United States and the West similar to the recent deadly attacks in Paris.

"No site has been more valuable than Twitter" to ISIS, says terrorism analyst Rita Katz, in the Washington Post. "Many Islamic State fighters are addicted; they even tweet during battle."

A Twitter spokesman has responded to reporter inquiries about the threats with this statement: "Our security team is investigating the veracity of these threats with relevant law enforcement officials."

Dorsey grew up in St. Louis, where he graduated from Bishop DuBourg High School.