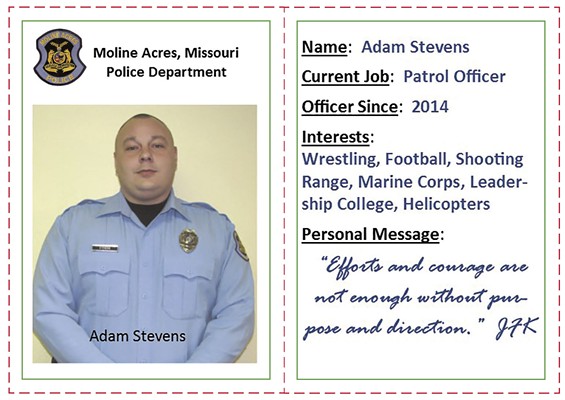 Moline Acres police will announce at a press conference today that officers will start carrying "cop cards," which resemble baseball cards, in a new effort to improve relationships between police and the community, especially with young people.

Reverend Larry Rice, who runs the New Life Evangelistic Center, says he pitched the idea to local police departments after hearing about a similar program in Vancouver. Moline Acres is the first city to take him up on the idea.

"The biggest problem we have in this area is the big gap that exists between police and youth, particularly African American youth," Rice tells Daily RFT. Especially after last year's unrest in Ferguson, Rice says, the St. Louis area needs a creative way to connect youth and police. "We've got to do things differently than what we are doing right now. We've become infamous around the world, and we continue to do things in a bad way."

Rice hopes young people will collect the cards and spark positive conversations with officers. In addition to the cards, police will also start writing positive tickets, which recognize residents for performing good deeds like picking up trash. Recipients can trade their positive tickets for prizes, such as one of the 100 $10 gift cards donated by Imo's Pizza.

New Life Evangelistic Center has already shelled out about $1,500 for the cop cards. Otherwise, Rice says, the plan would die owing to lack of funding.

"By contacting these police departments, we found they said, 'We have absolutely no dollars in our budget for something like this,'" Rice says. But Rice is willing to donate time and manpower. "This is something I feel very strongly about because I feel like it's an answer."

Rice says he was inspired to try positive ticketing and cop cards here after talking to Ward Clapham, a retired veteran of the Royal Canadian Mounted Police, who launched the program in Vancouver.

"They asked their young people, 'What do you think of police?'" Rice remembers. "One young man said, 'They hunt. They hunt my dad, my uncle. If they do bad, they lock them up.' We don't want police to continue to be seen as hunters."

But as the Ferguson protests reminded the St. Louis region, many residents, especially blacks -- who are disproportionately targeted in traffic stops and affected by municipal court fines and fees -- already see police as hunters.

"In the Wild West, Jim Crow area of St. Louis, we are going to have to start doing things differently," Rice says. "Do we want a police state? That's where it's headed. People feel they are treated in a negative way. That's what you saw happen in Ferguson."

"To succeed in life, you need three things: a wishbone, a backbone and a funnybone."

"Don't do drugs. Let's work together."

Rice hopes to expand the program to Breckenridge Hills and St. Louis County police next.