St. Louis Gets Rolling on Plans For Bike Sharing 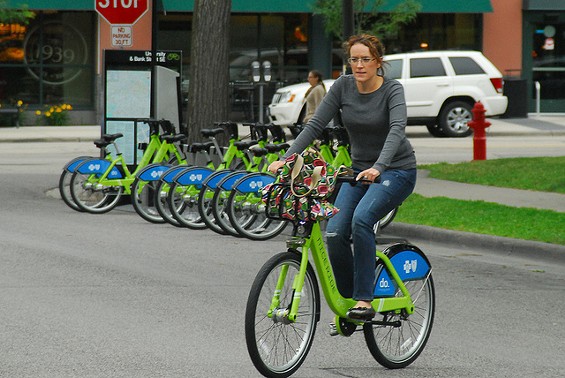 St. Louis is in line to become one of the next major American cities to launch a bike-share program, but the days of renting a bike are still years away.

A feasibility study released by Great Rivers Greenway this month shows bike sharing could be successful in St. Louis. More than 60 percent of St. Louis residents said they were either likely or very likely to use a bike share, according to the study. Potential riders say they'd use the service mostly to travel to entertainment and special events or while running errands.

But before bike sharing comes to St. Louis, the city will have to complete two major tasks: create a nonprofit organization to head the program, and raise between $2.7 million and $4.2 million in launch and capital costs.

"Once an owner is identified and once those funds are committed, it will probably be about two years until we are able to start riding these bikes," says Elizabeth Simons, a project manager with Great Rivers Greenway.

If bike share gets rolling in St. Louis, it'll cost about $1.3 million to maintain, with about 40 percent of operating costs offset by user-generated revenue, including membership fees, according to the study.

The study's proposed plan would place 540 bikes a 60 stations in St. Louis' central corridor, from downtown to the Delmar Loop. Bike-share users could pick up a bicycle at stations in downtown, midtown, the Central West End, Forest Park, the Grove and at Washington University, according to the study. 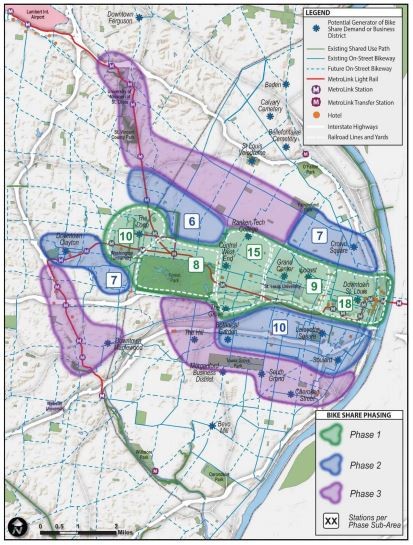 After about two years, St. Louis would add 270 additional bikes and 30 additional stations, including ones to the east in downtown Clayton and expanding St. Louis service to neighborhoods such as Lafayette Square, Soulard, Shaw, Old North St. Louis, JeffVanderLou and the West End. A third phase of building would expand the program's reach south to Cherokee Street, Tower Grove and the Hill, as well as north up the MetroLink service line toward the University of Missouri-St. Louis.

Bike-share organizers will reach out to the public for suggestions before deciding exactly where to build stations, which must be accessible and visible for the program to succeed.

"We want to have stations in locations that are very visible so folks know that they are there," Simons says. "We wouldn't want bike racks or stations to just drop down one day. We want people to be aware well in advance and have an opportunity to give their feedback."

Great Rivers Greenway has already started gathering suggestions for station locations online and at community workshops. One potential bike-share user suggested building one at Cleveland and Thurman avenues in the Shaw neighborhood, commenting, "We need more stuff like this in the heart of residential areas, not just out at the fringes. Let me walk a block, grab a bike and run to the store."