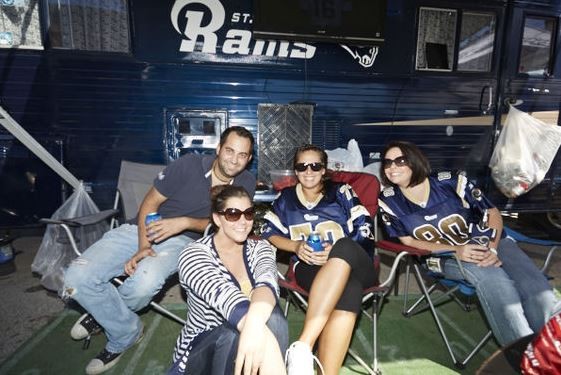 Tracing the ins and outs of the St. Louis Rams stadium drama would be lot easier without all these mixed signals.

And no, we're not talking about the plot recently unveiled by the Oakland Raiders and San Diego Chargers to build a shared $1.7 billion stadium near LA. Although that plan may complicate Rams owner Stan Kroenke's own vision to build an LA-area stadium for the Rams, there's also a good chance the Raiders/Chargers deal is a bullshit scare tactic to leverage tax dollars from Oakland and San Diego.

Rather, the mixed signals come from right here in St. Louis, where the Rams have canceled major fan events for the coming season, while at the same time city and NFL officials are polling fans about their feelings toward a new riverfront stadium.

See also: Kurt Warner Pretends Not to Hate the Patriots Long Enough to Give Them Super Bowl Trophy

News of the cancelled events -- which include August's FanFest, October's the Voice of the Fan Luncheon, Yoga Blitz and a breakfast event for personal seat license holders -- broke last week after SB Nation reported that the team sent out an internal memo announcing the cuts on February 12.

Our calls to a Rams spokesperson were not immediately returned, but the story was confirmed when St. Louis Rams VP Kevin Demoff began fielding anguished tweets from fans.

"@kingbrian_: No more Fan Fest? Disappointing" -We are looking to return to Friday Night Lights scrimmage concept instead of EJD scrimmage

Demoff tries to explain that alternative fan events (such as a scrimmage at Lindenwood University) would still retain some of the FanFest magic, but he sounds kind of like a parent on Christmas morning trying to explain to his disappointed kids why Mega Blocks is just as good as LEGO.

@Dsnodgrass72 -- We thought interaction w/players was better at Lindenwood, looking at scrimmage there or local high school instead of EJD

"@dave51501: HEY! Just sayin' Fan Fest is one thing, and a Cancer fundraiser is another -- Not canceling the donation just the halftime act

It should be noted, however, that Jim Thomas of the St. Louis Post-Dispatch disputed SB Nation's report, particularly the claim that the Rams' toned back marketing efforts are linked to Kroenke's plans to move the team to LA. Instead, Thomas said the decision to cancel FanFest had to do with budget issues, not the team's future in St. Louis.

"That story was wrong on several levels. The Rams way overspent last year on their fan stuff, some of the community stuff. The big culprit was that fifteenth-anniversary celebration for the Greatest Show team. They went way overbudget," said Thomas during an episode of the The Big Show on Monday.

See also: Andy Cohen Asks St. Louis: Is It Just Me, or Is Stan Kroenke An Asshole?

According to the Post-Dispatch, the survey is being conducted with assistance from the Rams, as well as from Dave Peacock and Bob Blitz, whom Governor Jay Nixon's handpicked to lead the new stadium's development.

So what's on the survey? More than 100 questions, ranging in subject matter from "a new open-air stadium" to fans' interest in shelling out $325,000 for a luxury box. No word yet if the survey will ask fans if they could play quarterback for a game or two after Sam Bradford's next inevitable knee injury.