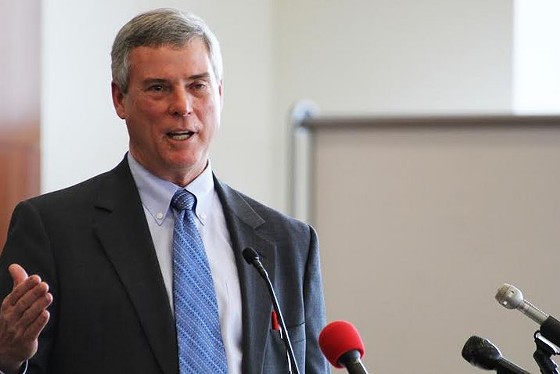 There are times when transparency can come back to bite you.

Exhibit A: Bob McCulloch, St. Louis County prosecuting attorney. McCulloch's decision to release hundreds of pages of transcripts has not, as he had hoped, satisfied those critics who accuse the seven-term prosecutor of mishandling (or outright manipulating) the grand-jury investigation of former Ferguson officer Darren Wilson. In November, a grand jury failed to indict Wilson for the shooting death of unarmed black teen Michael Brown.

"I find it hard to understand how anyone can complain that we gave this grand jury too much information," McCulloch told a crowd Friday, when he found himself on the defensive throughout much of a symposium on "Policing Post-Ferguson" held at Saint Louis University's School of Law.

"Maybe I'm missing something," he mused. "You may not like the evidence, you may pick it apart, and I expect that on any kind of case, but it's right there in front of you."

Those comments came during the question-and-answer session of McCulloch's presentation, after his initial remarks were interrupted by protesters singing "black lives matter" and staging a trial that ended with a woman dressed in a judge's robe declaring McCulloch "guilty" for his perceived role in engineering Wilson's non-indictment.

But aside from the protest theatrics, the most revealing of McCulloch's statements came when SLU Law professor Jesse Goldner asked him why he did not instruct assistant prosecutors Kathi Alizadeh and Sheila Whirley to cross-examine Wilson, as they did with other witnesses who testified before the grand jury. It's a discrepancy that many noted after the grand jury transcripts were first released, and it's included among the various criticisms listed in a formal bar complaint filed against McCulloch early last month.

audience claps for Prof Goldner's question: why was every witness crossed but not Wilson? this is not what we teach at #SLULaw #ThinBlueLine

McCulloch said he didn't have a problem with the way his prosecutors handled Wilson. Every witness is different, he said, and lawyers frequently change up their tactics depending on the witness' reaction to questioning. But he didn't stop there.

Somewhat surprisingly, McCulloch then pointed out a glaring weakness in the same grand-jury system he'd just been defending:

Essentially, McCulloch was saying that even if he'd wanted his prosecutors to cross-examine the details of Wilson's narrative -- such as Wilson's description of how Brown was "bulking up to run through the shots, like it was making him mad that I'm shooting at him" -- they couldn't, not without risking Wilson simply leaving the stand. Wilson wouldn't have that option in a formal trial. (See update below.)

Yet, McCulloch spent much of his speech defending his choice to use the grand-jury system to investigate Brown's shooting, as opposed to a grand jury's traditional role of determining probable cause prior to a formal trial.

In fact, McCulloch had just minutes before mocked a proposed Missouri constitutional amendment that would abolish the grand-jury system. The sponsor of that bill, Representative Brandon Ellington, of Kansas City, has called the grand jury "antiquated" and an obstacle to citizens' trust in the criminal justice system.

"The sponsor actually said, 'Why are we using this antiquated system anyway?'" McCulloch said, smiling. "What I'm sure he didn't realize is that he's a member of the legislature, which is an even more antiquated system than the grand jury."

Antiquated or not, the grand-jury system continues to face renewed scrutiny, and not just in Missouri.

Robert Ramsey, a St. Louis attorney who reviewed the grand jury transcripts released by McCulloch, told Daily RFT last month that the flood of information about the case hasn't dampened his suspicions that McCulloch and his prosecutors misused the grand-jury system.

"It just seems to me that what the appearance of all this is that all the prosecutors wanted somebody else to take the blame for making the decision not to prosecute," Ramsey said. "I think the institution as an investigative tool is obsolete, and I've seen so many cases of it over the years being abused."

Update: As some readers have pointed out, any defendant (like Wilson) can refuse to take the stand during a formal jury trial by citing their Fifth Amendment right, which protects defendants from being forced to incriminate themselves. The catch, however, is that Wilson would lose that right once he chose to testify. In that case, he would be court-ordered to answer all cross-examination questions.

The rules are different for a grand jury. There, Wilson had the luxury of taking the stand while knowing he could bail at the first uncomfortable question.