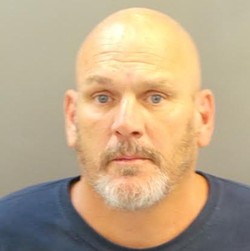 We've all dreamed of seeking revenge on the wintertime marauders who steal parking spots after someone finishes the back-breaking work of shoveling them out.

But this drunk St. Louis man took things too far last week, and he's facing two felony guns charges because of it.

After a snowstorm dumped several inches of powdery snow on St. Louis, Terry Moore, 52, shoveled out a spot for his car near his home in the 4100 block of Botanical Avenue, in the Shaw neighborhood, just before midnight on Wednesday night.

But things took a turn when a driver stole the parking space before Moore had a chance to move his car, witnesses told FOX 2 (KTVI-TV).

Moore pulled out his shotgun and fired in front of several onlookers in an apparent attempt to scare off the cheater who'd stolen his shoveled-out parking spot. Moore didn't hit any of the witnesses, but a police investigator says she found a hole and a shotgun shell near where Moore pulled the trigger.

Moore isn't allowed to possess a gun after being convicted on a felony charge of receiving stolen property in 2004. Police searched his house and found another gun, a silver pistol.

Even if Moore were allowed to have a gun, he was way too drunk to be using it, police said.

"He admitted to me that he was drunk," police investigator Melissa Chavez writes in the probable cause statement. "While speaking to him, I could smell alcohol on his breath, his speech was slurred, he was not properly clothed for the weather, and his gait was unsteady."

Sounds drunk to us.

Next time, Moore, just dump the snow back on the car like everyone else.