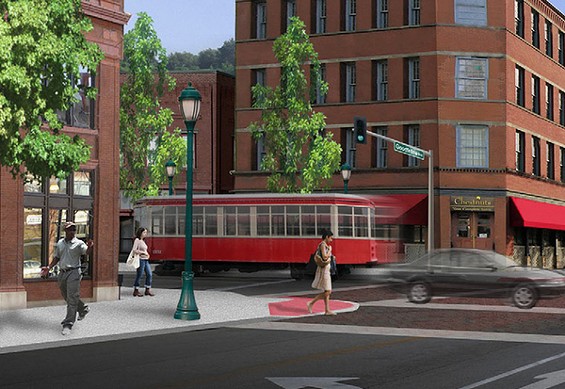 After years of planning, lawsuits and hold-ups, construction on the Loop Trolley is expected to start next month.

Construction on the $43 million, 2.2-mile trolley line connecting the Loop with Forest Park begins in March with the installation of a permanent, landscaped roundabout at Delmar Boulevard and Trinity Avenue to replace the traffic circle that now manages traffic near University City's lion gates and public library.

Once the roundabout is built, workers will begin laying the trolley track in late May, starting in the Loop near Kingsland Avenue. Cars will still be able to drive through the Loop business district during construction.

Officials expect the trolley to be ready for testing in mid-2016 and to be open for the public in late 2016.

The project hit a small bump in November when the first round of construction bids came back $11 million over budget. The trolley project has already been delayed by lawsuits and other roadblocks, though construction crews got started relocating utilities along the trolley route this summer. Trolley spokesman and Loop business magnate Joe Edwards, who dismissed the bidding issues as "fairly standard" for construction projects, told Daily RFT the trolley is still on track to open in 2016.

Loop Trolley contractors include Wissehr Electrical Contractors for electrical work and KCI Construction Company for rehabbing the maintenance facility and track and civil infrastructure. The construction manager is the Kwame Building Group.

Delmar Boulevard in University City was home to a streetcar system that gave the distinctive street its nickname -- "The Loop" -- until 1966. The new streetcar project will build ten station stops, including one at the Missouri History Museum, and rehab vintage trolley vehicles.