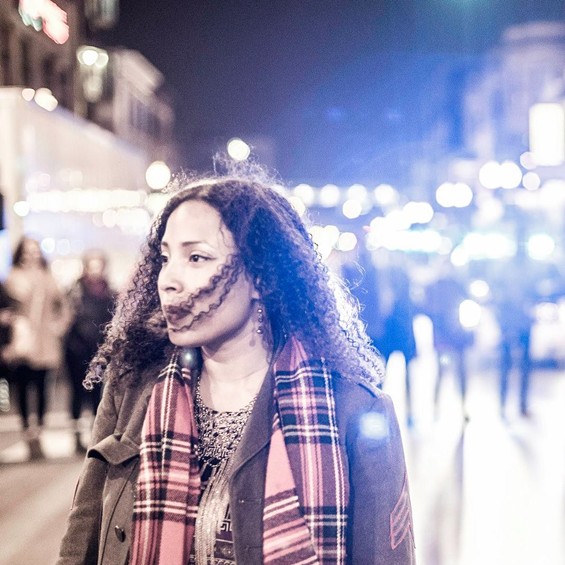 Lost Voices: A Ferguson Story was supposed to be a narrative documentary about the struggle for justice and equality after the shooting death of Michael Brown.

In exchange for exclusive access to Lost Voices -- a devoted and notoriously insular group of teens and twentysomethings who camped out in Ferguson during last year's unrest -- Chicago filmmaker Lonnie Edwards would dedicate his film to their cause. It would be a tool to raise consciousness for the demonstrators fighting against police brutality and racial discrimination in St. Louis and the country. Lost Voices would tour the country with Edwards' film, sharing their stories from the frontlines while engaging with people who watched the tumult unfurl on live streams and national news broadcasts.

At least, that's what they thought would happen.

In a disheartening-yet-predictable move, activists say Edwards reneged on the verbal agreement he made with protesters during those early, heady days of protest, and has now removed them completely from editing, marketing or production of the film. Even the title has changed; what started as Lost Voices: A Ferguson Story is now simply, A Ferguson Story.

"I hoped that [Edwards] would just do the right thing because he said so many times that he wasn't in it for the money, that he was down for the cause, for the movement," says Kristiana Colón, a Chicago-based activist who first introduced Edwards to the Lost Voices. She calls not getting an agreement in writing between Edwards and the Lost Voices her "greatest shortcoming."

See also: Ferguson Protesters, Including the Lost Voices, Get Kicked Out of Protest Sites

"I had to earn Lost Voices' trust, and now I feel like I have betrayed their trust because I have involved them with this person who has deviated from the values we set forth," Colón tells Daily RFT.

Edwards responded only once to numerous calls and emails from Daily RFT by writing this message: "I apologize for the hold up in my response time to your email(s) and phone calls, I've been busy working on these current issues diligently. At this moment I can't discuss things in regards to your inquiries, but once things get settled I will gladly speak to you on this subject matter."

On the surface, the conflict looks like a petty dispute between a filmmaker and his subjects. But Edwards' actions raise a larger question: As history looks back on the protests in Ferguson, whose voice will be recorded? Who gets to tell the stories that shape Ferguson's legacy?

Colón had hoped the answer to those questions would be the protesters she met while driving supplies to Ferguson from Chicago. In August, Colón and fellow activists organized a fundraiser to help Ferguson protesters and raised $10,000 -- well over their $1,300 goal. When she asked protesters what she should buy with the money, they asked for gas masks.

"That was a really disheartening answer to get from an American city only a few hours from Chicago," Colón remembers.

She invited Edwards, an up-and-coming filmmaker in Chicago, to accompany her to Ferguson to witness the protests. She says he stood her up the morning they were supposed to drive south, and sent two teenage filmmakers/mentees in his stead.

After meeting the Lost Voices, Colón and the activists she'd fundraised with organized themselves into the #LetUsBreathe Collective and dedicated themselves to supporting protesters. The teen filmmakers caught the collective's first meeting with the Lost Voices on camera as the young protesters requested sleeping bags to establish an outdoor camp.

When Colón and the teen filmmakers returned from that first transformative trip, Edwards agreed to create a documentary about the protests featuring the Lost Voices.

"We didn't realize we were in it for the long haul," Colón says. "We thought we'd done our good social-justice deed for the year and we could go back to our normal lives. But it's really hard to go back to your normal life when something like that is ongoing."

The #LetUsBreathe Collective paid for Edwards' travel, food and lodging with crowdsourced funds as the group traveled back and forth between Ferguson and Chicago. Colón says the collective had protesters sign media releases giving the collective -- not Edwards -- the right to use their images in the film and even helped shoot footage. She says Edwards agreed the collective would have producers' rights on the film, giving them input and approval on the documentary's final cut and marketing.

But things changed in December, when Edwards brought on a new producer, Todd Walton, to work on the film. By then, Darren Wilson had already been cleared of any possible criminal charges, resigned from the police department, and stores in Ferguson and Dellwood had burned to the ground.

Colón thought Walton would co-produce alongside her collective until she saw him and Edwards appear on Revolt TV, the music cable network founded by Sean Combs, to talk about the movie. There was no mention of the Lost Voices or of the activists who connected Edwards to them in the interview. 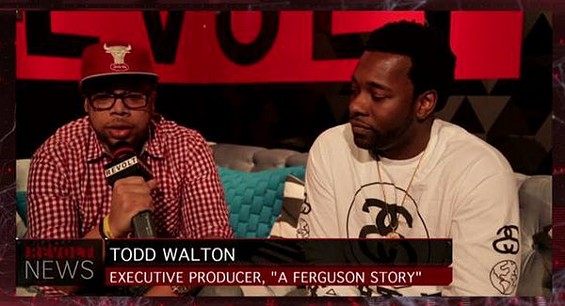 "The next time I saw the film, our names had been removed from the producer credits, and Todd's name was on the film as executive producer," Colón says. "When Todd came on board, Lost Voices' name was removed from the title of the film. That's not necessarily in line with our initial intention, which was really to tell the story of the protesters on the ground."

Edwards only traveled to Ferguson on one of the #LetUsBreathe Collective's twelve trips, and Walton has never been, Colón says.

"For those two people to be the ones on TV with A Ferguson Story beneath their heads is really a slap in the face to me and the other young women. It's been primarily young women on these efforts," Colón says. "I think there is a pretty long history, particularly in activist movements, of this kind of thing happening, particularly of men eclipsing the labor of women and using their labor for their own self-aggrandizing."

Insulted, Colón decided to go public. She started a petition demanding accountability from Edwards that has been signed by almost 400 people.

"Please sign if you agree that Lonnie Edwards and Todd Walton must remain accountable to the activists represented in the film and chime in to the community conversation on how to #DocumentWithDignity," the petition says. "What guidelines should the activist community require of the entertainment industry in telling (or selling) our stories?"

The petition hit a nerve. After weeks of silence, Edwards reached out to the #LetUsBreathe Collective about meeting, Colón posted on the petition. The group responded it would only meet with Edwards if the Lost Voices came and if Edwards agreed to stop giving press interviews until an agreement was reached.

Since then, Colón says she hasn't heard back from Edwards. Even if she does, she's not optimistic.

"We have found he'll say one thing to our face and do something else behind our backs," she says. "The Lost Voices are very hurt and very angry. I feel responsible to them because I introduced them to this guy, and they trusted me."

For now, the Lost Voices are planning a live stage production to serve the goal they'd hoped to accomplish with the film: to travel to colleges and community centers offering a creative way for audiences to learn about their experiences protesting in Ferguson. The group hopes to perform at Indiana University this spring.

"It is a workaround," says Colón.

Colón says the drama with Edwards doesn't change how the Lost Voices affected the protests in Ferguson.

"They were so willing to sacrifice so much," Colón says. "They are young folks who don't have to theorize about activism because they are living the experience. They have so much to offer."