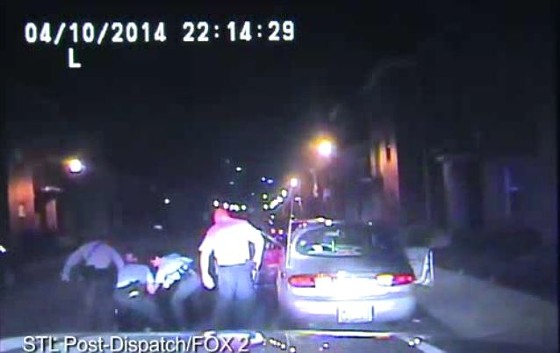 Those are the last audible words captured by a police dash camera before the footage goes silent. Eight seconds later, the entire feed goes dark.

Taken during an April traffic stop, the video is now at the center of an excessive-force lawsuit filed last month against four St. Louis Metropolitan Police Department officers. Not only that, but the officer who warned her fellow cops that they were "red right now" -- that is, a camera was recording their actions -- may soon face disciplinary action for compromising police evidence.

Released by lawyers representing Cortez Bufford, the eighteen-year-old man accusing the officers of abusively beating and tasering him, the video was held back for months at the request of St. Louis mayor Francis Slay's office, reports the St. Louis Post-Dispatch. Jeff Rainford, Slay's then chief of staff, denied that the footage was withheld to avoid provoking Ferguson protesters.

The traffic stop on April 10 began after Bufford's Ford Taurus made an "illegal U-turn" and "abruptly parked" in front of 1614 South 13th Street, several blocks from Lafayette Park, according to a police report. The report goes on to describe how officers smelled marijuana in the car and saw "plastic baggies and a green leafy substance."

The dash cam video shows Bufford, in the driver seat, refusing to leave his car even as his passenger complies with another officer's order. At the video's 6:05 mark, Bufford is dragged from the car and thrown to the ground.

The police report states that Bufford reached for his pocket during the struggle, and one of the officers, Nathaniel Burkemper, shouted that he'd spotted a gun. Another officer, Monroe Jenkins, then ran in and stomped Bufford in what looks like the head area. Bufford can be heard screaming as he is tasered multiple times on the ground. After the arrest, police recovered a Kel-Tec 9mm semi-automatic pistol with four rounds in the magazine and one in the chamber.

At one point an officer can be heard ordering Bufford to get on his stomach. Bufford responds, "I can't move."

Then, at the 7:53 mark in the video, SLMPD officer Kelli Swinton tells the group of cops assembled around Bufford to "hold up" because everything is being recorded.

After the camera was turned off, Bufford's lawyer says officers continued to strike him, causing abrasions to his fingers, face, back, head, ears and neck. According to the lawsuit, the injuries amounted to a medical bill for $6,439.32.

Bufford was charged with a felony for unlawful use of a weapon and a misdemeanor for resisting arrest -- but the charges were dropped in August. One of Bufford's lawyers, Joel Schwartz, told the Post-Dispatch the video contradicted the police narrative and proved that Bufford made a legal U-turn and parked properly, using his signal while pulling over to the curb. However, a spokesperson for the St. Louis Circuit Attorney's office said that although the officers' actions in subduing Bufford were not illegal, the charges were dropped because "the action of turning off the dash cam video diminished the evidentiary merits of the case."

A SLMPD spokesperson told KTVI-TV (Channel 2) that the officer who turned off the camera "has been recommended" for discipline, but is appealing.

The case raises familiar questions about proper police procedures for using dash cams and body cameras, not to mention the limitations of technology that includes an on/off switch. While various Missouri lawmakers have proposed bills that seek to regulate police cameras, many of these bills are primarily concerned with citizens' access to the footage.