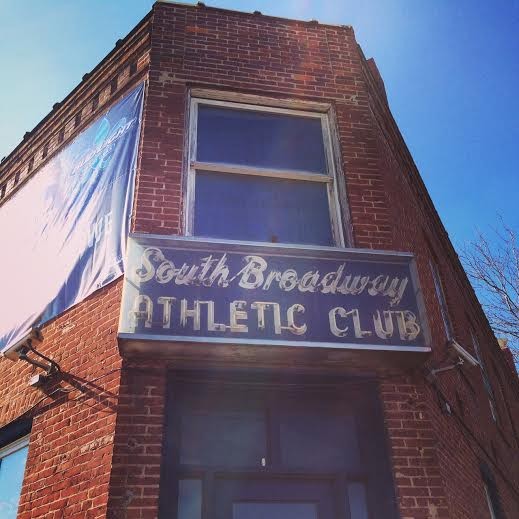 For more than a century, the South Broadway Athletic Club has been a haven for St. Louis' ring-hardened wrestling fans.

World Wrestling Entertainment's Randy Orton got his start here, along with a host of chair-smashing, head-bashing, pile-driving amateur wrestlers who've become local heroes to the regulars who come to the club's monthly wrestling nights for the dropkicks and cheap booze.

But after decades of declining membership drained the club of revenue, organizers say South Broadway could be down for the count.

"If we do not have a good Mardi Gras this year, it could be the end," says Al Bauman, who became the club's president in January. "By the end of the summer, we might have to shut down, and we don't want to do that. I made the commitment to these guys, we're not going to shut this building down. How? We're going to come up with a way."

"We are not going to close the doors," Bauman tells Daily RFT. "All we need, we just need help with the money.We've been here 100 years, and we are going to be here another 100 years."

In the 1970s, South Broadway had more than 400 members, Bauman says. But that number is dwindling.

"We're lucky if we have ten people at a meeting now," he tells Daily RFT. "A lot of our members are all passed away. A lot of them are up in age, and they don't like driving in that area or at night, so they dropped off the map."

As membership declined, so have the number of events held at the club. Even with extremely low hall rental fees, the club is lucky to book three events a month -- a far cry from the days when wrestling tournaments, boxing matches, homecoming dances and other events kept the club's calendar booked with more than 30 events per month.

"Our membership is dwindling and our taxes aren't getting any cheaper, and the bank accounts are getting lower," Bauman says. "I need some help."

Bauman, who's been a member for nearly 34 years, hopes new upcoming events, such as a battle of the bands and karaoke nights, will bring new faces through South Broadway's doors. The club still hosts its monthly wrestling night, six boxing events a year and an annual elder show along with MMA events and local bands.

Bauman is determined not to close.

"We're struggling, we're desperate, but we're not at that point yet as far as shutting it down," he says. "I'm going for it. I'm going to try to keep it open."

Bauman says he needs more than $20,000 to pay for taxes, insurance, the liquor supply, utilities and repairs. The club launched an online fundraiser for $10,000 earlier this month but has so far raised only $75.

Bauman had hoped Mardi Gras celebrations in Soulard would bolster the club until he saw the weather forecast.

"Twenty-four frickin' degrees," Bauman says through gritted teeth. "How many people are going to come down in the cold weather for a parade? This is supposed to be our big moneymaker."

Unless something changes, Bauman fears the first casualty will be South Broadway's second building, a mile south from the main club at Broadway and Cave Street, where fighters train and students learn how to box.

"That is to get kids off the street," Bauman says of the club's youth boxing program. But Bauman says he's not sure how much longer he can sustain the program.

"It's come to the point where we're ready to sell that building, and we don't want to do that," he says.

Right now, Bauman says, he doesn't even have the money for basic repairs.

"We want to repaint that place on the inside," he says. "I have the volunteers to paint it but not the money to buy the paint."

He doesn't even have enough to buy pizza and beer for the guys who'll happily volunteer to make the repairs the insurance company is calling for.

"We are hurting," Bauman says. "We need help bad."