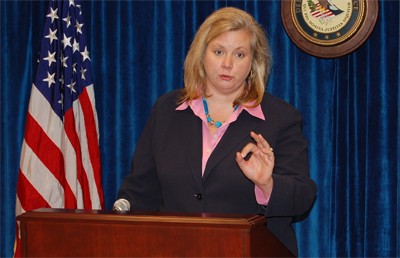 Hanaway, who was the first female speaker of the state House of Representatives, told attendees at the Educational Policy Conference that the liberal "culture of permissiveness towards sexual activity" puts America at risk of becoming a nation of child pornographers.

After all, Hanaway explains, if women are permitted to have sex (and even, gasp!, have children) without being married first, then it's only a matter of time before "every sexual preference" -- including child abuse, apparently -- "is acceptable."

"What concerns me is the slide in our culture that says, 'Hey, everything is OK, and so why should just having a picture of something be a crime? Because to possess child pornography is a crime, why should that be a crime?' Well, it should be a crime," Hanaway said, according to an audio recording.

Hanaway traces her logic back to the "war on women," a term liberals use to describe the GOP's fondness for cutting funding for women's health initiatives, restricting access to abortion and birth-control services, and defining sexual assaults on women as "legitimate" or illegitimate.

But Hanaway describes the "war on women" as though it were a battle to allow women to slut it up without any consequences other than a bill from the abortion clinic.

"Their chief criticism of conservatives, the chief criticism is that we stand up for the sanctity of life, that because we are pro-life we are somehow against women," Hanaway says. "I am here to say that their culture of permissiveness towards sexual activity is the real 'war on women.'"

Hanaway points to out-of-wedlock births as proof that "sexual permissiveness" is harming women. (For those keeping score at home, that means Hanaway is against unmarried women either giving birth or having an abortion, leaving Daily RFT wondering what exactly they're supposed to do with the fetus. Keep it in there forever?)

Having children before marriage "has impoverished women," Hanaway continues. "It has reduced their access to educational opportunities. It has impoverished and endangered their children. It has forced those children to grow up in households where their mothers have to work to make it economically viable for them to exist, and with no fathers. How is that culture good for women and children?"

Hidden in there is a great point by Hanaway. Poor women have few resources to raise families on their own, and that's part of the reason why women's health advocates push for comprehensive sexuality education that empowers women to delay or prevent pregnancy.

But that's where the logic stops. Hanaway continues by saying that the cultural acceptance of unmarried mothers is a slippery slope that leads to the toleration of child pornographers.

"If you pursue this course that sexual permissiveness is to be valued, which is the liberal framework, and that you should protect sexual permissiveness through abortions and other things, you lead to a conclusion where every sexual preference is acceptable," Hanaway says. "Now, I still think and pray that an overwhelming majority of Americans believe that those who have a sexual preference for children are evil."

Hanaway served as a U.S. attorney under President George W. Bush until 2009 and announced her bid to replace term-limited Governor Jay Nixon a year ago.