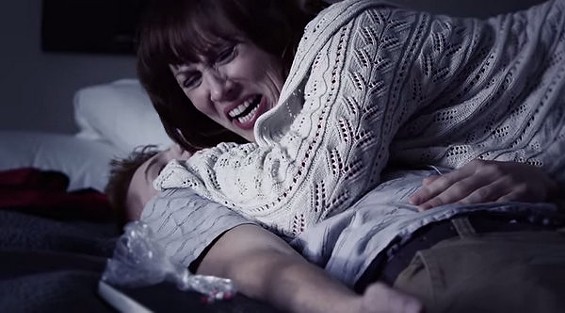 America wakened from its seven-layered Super Bowl stupor Monday morning to discover something St. Louis already knew: what it looks like to overdose on heroin in your mom's house while some twee songstress strums the ukulele.

The commercial, run locally by the National Council on Alcoholism & Drug Abuse-St. Louis, aimed to raise awareness about the epidemic of heroin and prescription painkiller addiction here. (You can tell it's St. Louis because the mom is carrying Schnucks grocery bags. Also, the heroin.)

See also: People Are Using More Heroin Because It's Cheaper Than Painkillers

In St. Louis, the anti-heroin PSA made waves immediately -- an impressive feat considering all the other super-depressing Super Bowl commercials that aired this year:

"And that's hooooow, that's how you got addicted to heroin" WHAT IS THIS COMMERCIAL

Since the ad didn't run nationally, it took the rest of America a while to catch on to how upbeat/creepy, chipper/terrifying, sprightly/OMGHEROINWILLKILLYOU the commercial really was. By Monday afternoon, the video was up on Sports Illustrated, Huffington Post, Ad Week (who called it "bizarrely bleak,") NBC News (who said it "left us creeped out or crying,") Uproxx (who called it "a bad joke,") and Deadspin ("psycho.") The Washington Post used the commercial to anchor a story about Naloxone, the medicine that blocks opiods from the brain's receptors and reverses its effects.

The National Council on Alcoholism & Drug Abuse defended itself against national (and local) outcry over the commercial, pointing to the fact that heroin kills more people in St. Louis County than homicide. Almost 2,300 people have died from heroin ODs in St. Louis over the past eight years, according to the organization.

"In using the tools of drama to convey this crucial truth in a 60-second spot, we created a parallel disconnection between the visual story we see on screen and the musical story we hear," the nonprofit explains in a statement accompanying the video. "It is disturbing. It is jarring. It is painful to watch. And we must pay attention to it."

The anti-drug group apologized to anyone upset by the video and said the "juxtaposition of the upbeat music with the horrifying images" was intentional. Here's how they explained it:

The terrible truth is that some young people see the use of prescription opiates as a kind of lark, something fun and relatively risk-free. That perception is entirely disconnected from the reality: that experimenting with highly addictive opiate painkillers, which are almost chemically identical to heroin, all too often ends in heart-breaking tragedy. The "happy sounding" music also makes it possible for the average viewer to watch what's happening while the lyrics explain the grim details. Without the music, most people turn away; but the song, juxtaposed with the horrifying images, makes it possible to watch this tragedy unfold. We do not want people to turn away from this problem. Our community has been turning away for far too long.

Well, it worked, NCADA. America is totally freaked out, and it's all your (and Nationwide Insurance's) fault.