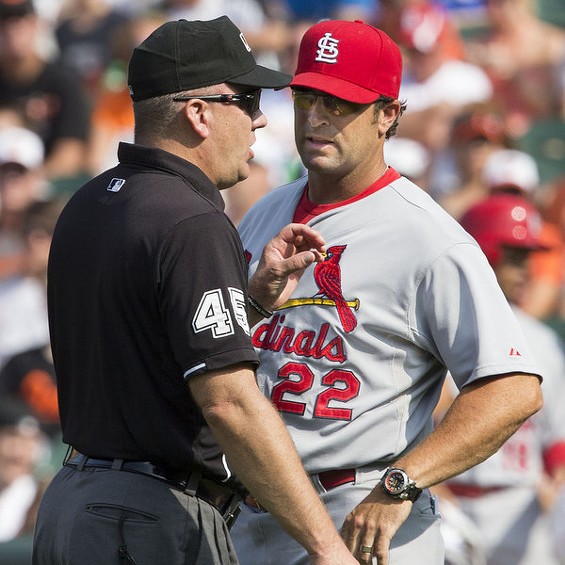 St. Louis Cardinals manager Mike Matheny didn't know what to expect the first time he read his "manifesto" on coaching to the parents of a little league team.

It was 2009, and Matheney knew that before he could agree to sign on as coach, he'd have to be upfront with the team moms and dads about his tough-love approach -- including his belief that, as he says in his five-page, 2,556-word manifesto, "the biggest problem with youth sports has been the parents."

"As I am writing this, I sound like the little league Nazi, but I believe that this will make things easier for everyone involved," Matheny wrote.

Six years and a new job leading the Cardinals later, Matheny publishes a memoir today called The Matheny Manifesto: A Young Manager's Old School Views on Success in Sports and Life based on the manifesto that made such a splash in baseball circles across the country. Billed as an inspirational look at how sports can teach everyone to win on and off the field, Matheny has filled his new book with the same throwback beliefs about discipline, faith and respect.

Since it was Matheny's "manifesto," written in a haze of determined frustration on a flight to St. Louis from New York, that inspired the new book, Daily RFT had a look at it to find tips for the wannabe Matheny inside us all.

Here are six things we learned from Matheny's original manifesto:

1. Your real opponent isn't the other team. It's your players' parents. Want to be an inspirational, effective coach? Start by getting the parents in shape. They're the real barrier to greatness, Matheny says, and the best way to stop the interference is to "nip this in the bud right off the bat." (Note the flawless use of a baseball pun.)

"Let's pretend that [players] are at work for a short amount of time and that you have been granted the pleasure of watching," he writes to parents. And that includes water breaks. Matheny says players should have "some responsibility for having their own water" so parents behind the dugout stop interrupting to ask if their child is too thirsty or hungry or hot or tired or sweaty or whatever parents say.

Matheny says he's doing parents a favor by keeping them at arm's length during coaching.

"I have taken out any work at all for you except to get them there on time and enjoy," he says.

2. The coach is right, even when he's wrong. The idea that adults are "always right" has lost a lot of popularity in recent years, but just because the times are changing doesn't mean Matheny has to. The Cardinals skipper quotes this piece of throwback wisdom learned from his father to stop parents from complaining to him when their children have to play positions they don't like.

"Our culture has lost this respect for authority, mostly because the kids hear their parents constantly complaining about the teachers and coaches of the child," Matheny says. So if your kid doesn't like his playing position, the batting order or anything else about Matheny's methods, tough luck. The coach is always right.

"The principle is a great life lesson about how things really work," he says.

After all, if the coach is really wrong, he'll apologize.

"I hope that I will have enough humility to come to your son if I treated him wrong and apologize," he says.

3. Be who you are unapologetically. Matheny is upfront with parents that his Christian faith guides his life.

"I have never been one for coercing my faith down someone's throat, but I also believe it to be cowardly and hypocritical to shy away from what I believe," he writes.

Matheny knows this will make parents uncomfortable, but he never shied away from his beliefs as a player and didn't plan to start as a little league coach, he writes in the manifesto.

"You as parents need to know for yourselves and for your boys that when the opportunity presents itself, I will be honest with what I believe."

4. Keep your players' minds in the game. Matheny demands the attention, concentration and effort of his players. In his manifesto, he lists his expectations: Come ready to play, shirts tucked in, hats on straight, pants "not drooping down to their knees," with hustle from the first step of the dugout and absolutely no messing around on the bench.

On and off the field, Matheny says, he's constantly asking players what they're thinking to mentally prepare them for the game.

"They are boys, and I am not trying to take away from that," Matheny writes to preemptively defend against parents who decry his strict methods. "But I do believe that they can bear down and concentrate hard for just a little while during the games and practices.

5. Again, tell the parents to keep their traps shut.

Usually it's the children who are supposed to be "seen but not heard." But on Matheny's field, it's the parents who should keep quiet. Tips or even cheers -- like, "Come on! Let's go!" -- are forbidden from the bleachers because they only put more pressure on the kids.

"I am not saying that you cannot clap for your kids when they do well," Matheny writes. "I am saying that if you hand your child over to me to coach them, then let me do that job." Matheny even makes a special plea to parents to remind their own parents, the players' grandparents, not to interrupt him while he's coaching.

"I believe the biggest role of a parent is to be a silent source of encouragement," Matheny says.

6. Stay classy. Matheny has three goals: teach players the game, make a positive impact on them as young men and do it all with class.

"We may not win every game, but we will be the classiest coaches, players and parents in every game we play," Matheny says.