St. Louis Ad Seems to Say: Life Is Short, So Buy Cremations for Your Kids

Like any business owner, St. Louis Cremation's Oliver King simply wanted an advertisement that would attract new eyeballs to his company. By that measure, the small print ad that ran in the January 28 issue of "luxury lifestyle magazine" Town & Style St. Louis was a success.

Using a photo of his daughter wearing a large pink flower in her hair, King added text, meme-style, that read "Don't let the flower fool you," and, "She'll be a teenager soon." King slapped on the company's logo and contact info, sent the design to the magazine and called it a day.

Unsurprisingly, the marketing gem set off a firestorm of befuddled reactions on Facebook and Reddit, where many wondered what the hell the ad was trying to say and, with equal befuddlement, why.

See also: Pitch Sessions: A look back at the wild and wacky local TV ads of yesteryear.

Daily RFT reached out to King to clear up the confusion. King says the ad ran exactly as he designed it, although he didn't foresee this reaction.

"Ads are usually so boring that people usually don't stop and see. I was just trying to get people to stop for a second and see the picture, and then my company's name. That was it," he says. "The two are not supposed to be related, except that's my daughter and my company."

Indeed, King maintains that he included the photo of his daughter and accompanying text as a self-contained quip about the transience of youth, not a psychological sucker punch to parents who may not have considered the benefits of cremating their soon-to-be-dead kids.

Though King says he hasn't read the various Internet comments picking apart the ad, concerned callers to his business have expressed similar concerns.

"I got people calling and complaining, like, 'Are you going to kill her? Is she going to kill someone?'" he says. "I couldn't believe that went somewhere in their minds that they thought that was what I was trying to say."

Regardless of King's intentions, the company announced over Facebook yesterday that it would be discontinuing the ad campaign.

"I'm sorry for any confusion and if anyone was offended by it," King says. "I definitely did not mean for all of this to happen. I thought after a week no one would notice it and we would go on."

Alas, from now on St. Louis will have to deal with the encroaching specter of death without the assistance of St. Louis Cremation's lighthearted -- if tone deaf -- meme mashups. To get us all by, here's another, similarly styled ad that ran in Town & Style's December 10 issue. 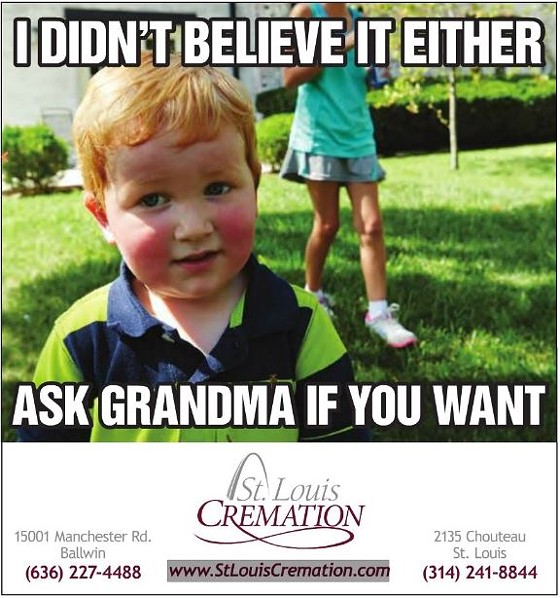