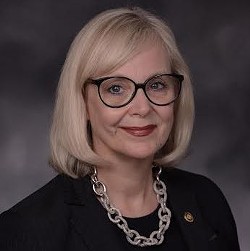 Two state representatives from Missouri and Kansas are coming together across state and partisan lines to implement new anti-gun violence legislation.

The bills -- sponsored in Missouri by Richmond Heights Democrat Stacey Newman and in Kansas by Republican Barbara Bollier -- bolster current state laws by requiring people with stalking or domestic violence convictions to surrender their firearms, instead of just barring them from buying new ones.

"This is a way to save lives," Newman tells Daily RFT. "You can say (to convicted abusers), 'You can't own a gun,' but if there's already a cache in your house or you know this person already owns a gun, this takes it a step further."

Newman's bill in Missouri goes even farther than that, creating a gun violence restraining order that would allow an individual or law enforcement to ask a court to temporarily confiscate guns from people who show signs of committing violence.

The gun restraining orders are modeled after a new law in California inspired by the deadly University of California Santa Barbara shooting in Isla Vista that killed seven and injured thirteen. The parents of the gunman, 22-year-old Elliot Rodger, reported him to law enforcement before his lethal rampage but had no legal way to remove his weapons.

"It gives law enforcement, it gives families the opportunity to actually try to avert tragedies when they know someone's in crisis and we know there is a high potential for violence," Newman says.

Newman's bill may be inspired by mass deadly shootings -- like the ones in Isla Vista, California; Newtown, Connecticut; Tuscon, Arizona; and Aurora, Colorado -- but it's particularly resonant here in St. Louis, where a string of shootings and fifteen homicides in the first month of 2015 have left the city reeling from gun violence.

"We know there are too many illegal guns on the streets," Newman says. "There have been a lot of things that lead to that, including many of our lax gun laws along with our brand new Constitutional amendment giving felons additional rights to bear arms.

"We have allowed this," Newman continues, "and now people are seeing the effects."

"We can't sit back and wait," Newman says. "We've got to put human lives first."

Restraining orders for weapons would work just like domestic violence restraining orders, Neman says. A person or law enforcement officer can ask a judge to grant an order barring the at-risk individual from purchasing, owning, possessing or controlling a gun for two weeks, followed by a full court hearing to determine whether the order should be extended.

Newman's bill may be targeting firearms, but she says protecting women from gun and domestic violence is at the heart of the proposed legislation. Kansas City Star editorial writer Mary Sanchez says it best about the connection between guns and violence against women:

Because the way gun laws are currently written in Missouri and Kansas, the right to own a gun too often supersedes a woman's right to safety. Given the lengths that legislators have gone to expand gun rights, the bills will face the obstacles of ignorance and patriarchal dismissal. A gun is a powerful tool of intimidation. Abusers don't even have to fire it. It's often left on a kitchen table, on the nightstand, within easy reach. Common threats hurled: "I'll kill you, the children, myself if you (leave, speak, dare to even move)."

Newman knows her bill will come under fire, so to speak, from Missouri's pro-gun, NRA lobby, but she's motivated by the statistics that show Missouri ranks 7th in the U.S. for female homicides committed by men -- almost always by a man the victim knows, and usually with a gun.

"Women are the most affected here," Newman says. "When you look at these numbers, how can you not be afraid? And yet, at the same time, there are common sense things we can do."