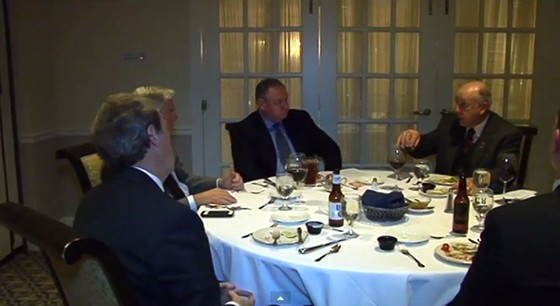 There's a fresh controversy in the Missouri legislature, and this time, for a change, it doesn't involve the return of "legitimate rape."

Instead, the ire is being directed at the four Republican members of the Missouri House Telecommunications Committee who last night grabbed dinner at the posh, jackets-only Jefferson City Country Club. Over drinks and a sumptuous entrée selection (saffron sea bass, honey miso chicken or an eight ounce filet au poivre), the elected officials proceeded to accomplish, well, nothing, since no bills have been assigned to the committee. The dinner tab was footed by the Missouri Telecommunications Industry Association, a lobbying group for the industry the four lawmakers are tasked with regulating.

Enjoying a lobbyist-funded meal is hardly excessive for the Missouri legislature, but the stink raised after last night's hearing got so bad House Speaker John Diehl announced this morning that, effective immediately, all house committee hearings must take place at the capitol, according to PoliticMO.

Following the country club hearing, @johndiehljr tells me: "I issued an order that all committee meetings are to be held at Capitol." #MOLeg

Diehl's announcement, however, doesn't detract from the almost comic scene that played out at the Jefferson City Country Club on Tuesday night, as the four lawmakers munched their meals alongside five lobbyists while reporters and camera crews hovered nearby. Liberal advocacy group Progress Missouri also live-streamed the whole thing.

In the past week, both the St. Louis Post-Dispatch and Kansas City Star editorial sections have pointed to the country-club hearing as emblematic of the dubious ethical standards of our state legislature. U.S. Senator Claire McCaskill has weighed in as well.

In his opening remarks of the hearing, committee vice chair Representative Ron Hicks addressed criticism of the expenses-paid dinner.

"I know a lot of things do happen outside of the office and we do get a lot of the information from you that way," said Hicks to the five lobbyists, which included representatives for AT&T and CenturyLink.

"I appreciate it," Hicks added. "Thanks for the invite."

However, Richard Telthorst, the representative of the industry group bankrolling the dinner, told the Post-Dispatch that it was the committee's chairman, Representative Bart Korman, who suggested having the meeting at the country club.

"He suggested we do it over a meal," Telthorst said. "I said that would fine by me."

As for Korman, he appeared visibly uncomfortable during an on-camera interview when PoliticMO's Eli Yokely asked if the dinner was being paid for by the telecommunications industry.

Here's a video of the cringe-worthy news spot. Korman's interview starts at the 1:10 mark.

With the word coming down from House Speaker John Diehl that such meetings must be held in the capitol, a second lobbyist-funded "committee hearing" scheduled for tonight at the Jefferson City Country Club -- this time for the House Utilities Committee -- was canceled and moved to the capitol, as per Diehl's order.

We imagine the venue change is disappointing for Hicks and Korman, since both also serve on the House Utilities Committee, and so they nearly had the chance to score a second free dinner at the country club. It remains to be seen if lobbying firms will start catering more meals to better serve their hungry lawmakers.