FOX 2 Is Spying on the Homeless From a Helicopter 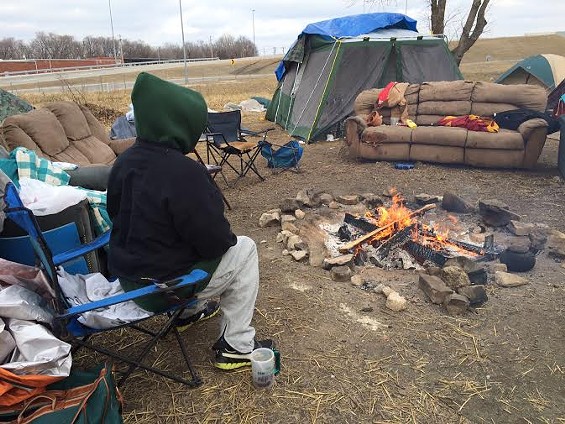 When news broke that St. Louis' new director of human services wants to shut down a downtown homeless camp, FOX (Channel 2) was on the scene...sort of.

FOX sent its news chopper, the Bommarito Automotive SkyFOX helicopter, to the encampment near the Stan Musial Veterans Memorial Bridge to film footage of the camp's dumpster, portable toilet and tents.

Chad Bergman, who pitched the first tent at the homeless camp in August, tells Daily RFT he first thought FOX's helicopter was a police chopper because it hovered for such a long time directly over the camp.

"They don't want to talk to nobody," Bergman says, pointing straight up to where the helicopter flew the day before. "I invite everybody up here. We have nothing to hide."

Here's what FOX found out from the air:

Helicopter video showed old furniture surrounded by more than a dozen tents on a patch of land just off of Interstate 70. The video also showed plywood and wood pellets in the makeshift village, possibly for shacks or maybe firewood. A dumpster was also near the camp, as well as a port-o-potty.

The FOX report treats the plywood pile as particularly worrisome after the city bulldozed wooden shacks in the homeless camp called Hopeville in 2012. But the plywood and wood pallets are not for shacks or firewood, Bergman says. They're for makeshift sidewalks. The recent rain has made the camp's grassy grounds muddy, so residents walk on pathways made from plywood.

"They're worried about the sidewalks?" Bergman asks after hearing about the FOX report. He turns to a group of four people near the camp's fire pit, points toward the wood pile and says, "Remember how I keep telling you not to build anything with it?"

One of the men by the fire nods angrily.

"What are we supposed to do?" he says. (He asked Daily RFT not to identify him by name.) "It's peaceful. We're not hurting nobody."

Bergman says the camp added three more residents recently after donations from nearby charities and Illinois residents coming across the bridge allowed them to stock up on necessities, including food, water and toiletries. The group does have a dumpster and a portable toilet.

"If we didn't have a trash can or a port-a-john, wouldn't that be a public-health concern?" Bergman asks. "It's cluttered, but there's no trash. [The residents] are just down on their luck."

FOX eventually ended up up sending a reporter to talk to the camp's residents: