Woman Gets Hit by Two Cars, Dies Crossing the Street In Front of Restaurant 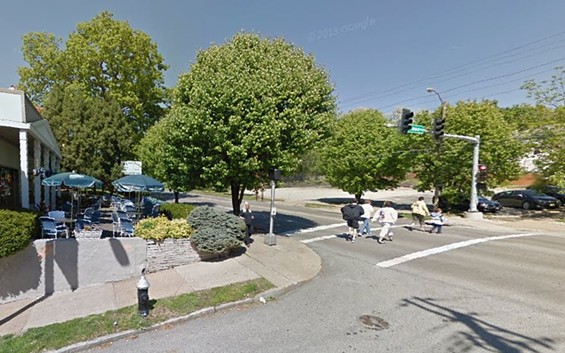 Neighbors are asking for safety improvements to McCausland Avenue after a 45-year-old woman died Sunday crossing the street.

Candi McNeal of Brentwood was leaving the popular south-city Greek restaurant Olympia Kebob House and Taverna just before 7 p.m., police said. She was struck by two cars at McCausland and Plateau avenues, just south of I-64, and was taken to the hospital, where she died.

The drivers were not injured and stayed on the scene of the fatal accident. One of the drivers, who identified himself to the St. Louis Post-Dispatch as David Quanty, 61, of Moscow Mills, said he had a green light and was driving the speed limit when he drove his pickup truck through the intersection and struck the woman.

Alderman Scott Ogilvie, who represents the Dogtown neighborhood, confirmed on Facebook that the drivers had a green light when they struck the pedestrian.

Quoting a police lieutenant on the scene, Ogilvie said the woman and her husband were crossing McCausland Avenue against the light and stopped halfway across when she was hit by the mirror of a car traveling south. The impact pushed her into the northbound lanes, where she was struck again by Quanty's truck.

Her husband was not injured.

Ogilvie says the drivers are being tested for drugs and alcohol, and there were no signs of "erratic driving." He also says a camera captured the accident on tape.

This isn't the first time a fatal accident has happened at that intersection, which has Olympia on one side and its parking lot on the other. An 82-year-old woman was fatally struck there in 2004 by a hit-and-run driver.

And neighbors say unless something changes, it won't be the last. The intersection is notoriously dangerous with drivers traveling at high speeds down McCausland's south sloping, straight and narrow lanes.

Vehicle #1, a Volkswagen Passat, was traveling southbound on McCausland approaching Plateau when the driver's side mirror struck the pedestrian, who was standing in the middle of the roadway while crossing the street against the light. The impact caused the pedestrian to travel into the second lane, facing northbound on McCausland at Plateau. As Vehicle #2, a Nissan Frontier, was passing the intersection, the left side of the vehicle struck the pedestrian. The pedestrian was conveyed to a hospital and pronounced deceased. Both drivers remained on the scene. The investigation is ongoing.