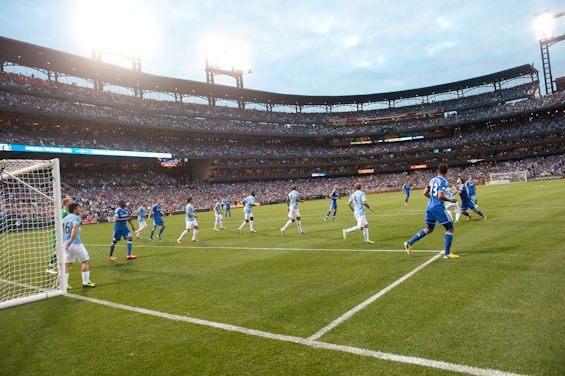 If you liked watching the World Cup last summer but wish America had a real shot at the title, then you'll love the U.S. women's national soccer team.

And if you love U.S. women's soccer, then we've got big news: The team will play a friendly at Busch Stadium against New Zealand in their only Midwest stop before the women's World Cup starts in Canada this summer.

More details are expected Monday, but here's what Daily RFT knows so far: Tickets go on sale 10 a.m. Friday for the Saturday, April 4, game. Seating will be limited to Busch Stadium's lower sections, putting capacity at about 23,000 people.

Update, 11 a.m.: The announcement is now official! Here's what the team released this morning about tickets:

The game will be the third time Busch "Baseball Heaven" Stadium has transitioned into a soccer pitch for an international friendly. Chelsea F.C. and Manchester City F.C. sold out Busch Stadium in May 2013 with a crowd of 48,000 fans, and more than 30,000 people turned out for the game between Bosnia-Herzegovina and Argentina in November 2013. Meanwhile, the 2013 match between Real Madrid and Inter Milan packed the Edward Jones Dome with 54,000 fans.

America seemed to rediscover its latent love for footy during the 2014 FIFA World Cup. Goalkeeper Tim Howard won his country's respect with a record fifteen saves in the World Cup match against Belgium, but it wasn't enough to push the U.S. team into the quarter-finals. America hasn't placed at the men's World Cup since winning third in 1930.

Contrast that with the women's national team, a veritable soccer powerhouse, touting two of the first three World Cup titles and gold medals from four of the last five Olympic tournaments. Team forward Abby Wambach is the greatest goalscorer in (both men's and women's) international soccer history with 177 goals.

See also: How to Feed Your Soccer Addiction in St. Louis When the World Cup is Over

Even if you're not so into sports but love the booze-coated, soap-opera antics that come along with them, the women's team doesn't disappoint. Goalkeeper Hope Solo's domestic violence arrests have been keeping her in the headlines of ESPN and TMZ alike, and the team suspended her earlier this year after her husband, former NFL player Jerramy Stevens, was arrested on suspicion of driving under the influence while behind the wheel of the team's van in California.

If all that's not enough to tempt you towards women's soccer, then Daily RFT appeals to your sense of St. Louis pride. Two of the team's players are from the Lou: Lori Chalupny, who attended Nerinx Hall, and Becky Sauerbrunn, who attended Ladue High School.