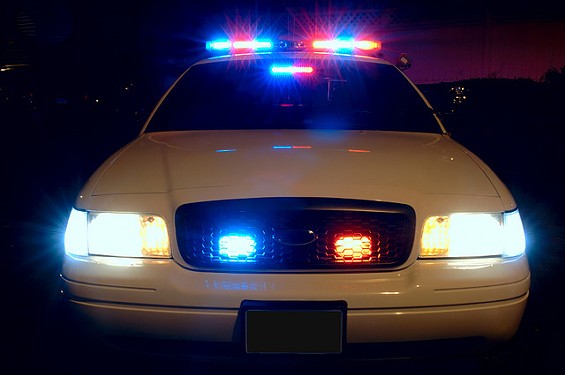 With fourteen homicides under its belt, St. Louis was still reeling from last week's five back-to-back deadly shootings and the gun battle in a movie theater parking lot on Martin Luther King Day weekend when the news broke that there was another officer-involved shooting.

The shooting -- and especially the semiautomatic weapon recovered by police -- prompted a rare and explicit message from police buried in the incident report released to media:

Although no officers were injured in last night's incident, this gun represents the dangers that officers face on a daily basis. Guns, like this one, in the hands of criminals not only put officers at risk; they put everyone in our community at risk. The investigation is ongoing.

Here's what happened, according to police:

Officers patrolling near the 4600 block of Cottage Avenue tried to pull the suspects over around 9:45 p.m. Wednesday when the car fled at a high rate of speed. When the cops caught up to the Monte Carlo, the car tried to turn into an alley but hit a retaining wall, causing the car to roll backwards into the marked police vehicle, which was lightly damaged.

That's when Holmes, who lived nearby in the 4200 block of Saint Louis Avenue, got out of the car holding the gun, police said.

The two police officers, a 29-year-old black officer with seven years of experience and a 35-year-old white officer with eight years experience, exited their car and ordered Holmes to drop the weapon. He didn't, and the officers shot him. Holmes was pronounced dead at the hospital.

The driver, who has only been identified by police as a ninteen-year-old black man, stayed in the car and was arrested without incident.

Investigators found that the Monte Carlo's owners reported the car stolen in December. The gun, however, was not reported stolen. It was purchased in DeSoto in 2002, but not by Holmes, who was seven-years-old then.

Especially for those who have been protesting police brutality since the August shooting of Michael Brown in August, Holmes' death seemed like yet another in a constant string of gun violence.

It just.. Keeps happening RT @WyzeChef: The police just used deadly force on the west side of Stl. This is the twilight zone.

By name of victim. :( "@OwlsAsylum: The world is going to know every street in the Lou by the time this is over..."

As ppl are tweeting about the officer involved shooting, for the 3rd night in a row, I hear gunshots. STL. STL. STL. smh

Here is the incident summary from police:

The officers were patrolling the above area when they observed a red Chevrolet Monte Carlo commit a traffic violation. As the officers turned their police vehicle to initiate a traffic stop, the suspect vehicle fled, driving at a high rate of speed. The officers then called for additional officers to respond to the area. Eventually, the officers observed the suspect vehicle near the intersection of Cottage and Marcus and got behind it. In an attempt to avoid contact with the officers, the suspect vehicle turned left to drive north in the alley located in the 4600 block of Cottage. As it turned, the suspect vehicle struck the concrete retaining wall. The impact incapacitated the vehicle and it rolled backward into the marked police vehicle, causing minor damage. Suspect #1 exited the passenger side of the vehicle, armed with a gun, which was found to be an INTRATEC-9mm with a high capacity magazine. Both officers exited their vehicle and gave verbal commands to Suspect #1 to drop the gun. Suspect #1 did not comply. Fearing for their safety, both officers fired their department-issued weapons at Suspect #1, striking him. Suspect #1 was conveyed to a hospital, where he was pronounced deceased. Suspect #2, who was driving the suspect vehicle, remained in the vehicle and was taken into custody without incident. The gun was recovered from the scene. Investigation revealed the suspect vehicle was reported stolen on 12/5/14. As is department policy, both officers have been placed on administrative leave. The Force Investigative Unit is investigating. The investigation is ongoing.The INTRATEC 9mm shown in the below photos was recovered from the suspect involved in last night's officer-involved shooting incident at Marcus and Cottage. The gun was purchased in DeSoto, Missouri in 2002, however the suspect was not the purchaser. The gun had not been reported stolen. Although no officers were injured in last night's incident, this gun represents the dangers that officers face on a daily basis. Guns, like this one, in the hands of criminals not only put officers at risk; they put everyone in our community at risk. The investigation is ongoing.