State of the Union 2015: Obama Mentions Ferguson in Call for Reforming Justice System 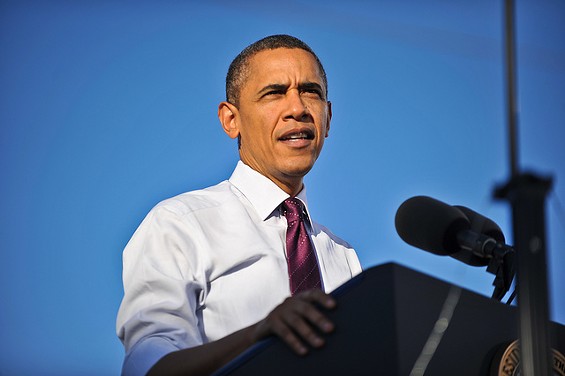 Of course President Barack Obama mentioned Ferguson in the 2015 State of the Union.

More than 160 days after the fatal police shooting of Michael Brown, the word Ferguson has come to represent a national rallying cry for racial justice. The question wasn't whether Obama, America's first black president, would drop the F-bomb; it was how.

Obama chose a delicate, balanced approach when he touched on the contention surrounding Ferguson, as well as the police killing of Eric Garner in New York, towards the end of the State of the Union speech. While he was careful not to appear to "take sides" in the nationwide debate on race and police brutality, Obama used the events in Ferguson to call for reform to the criminal justice system.

See also: Obama Tells United Nations that Ferguson Is Proof U.S. "Failed to Live Up to Our Ideals"

Here's what he said about Ferguson:

We may have different takes on the events of Ferguson and New York. But surely we can understand a father who fears his son can't walk home without being harassed. Surely we can understand the wife who won't rest until the police officer she married walks through the front door at the end of his shift. Surely we can agree it's a good thing that for the first time in 40 years, the crime rate and the incarceration rate have come down together, and use that as a starting point for Democrats and Republicans, community leaders and law enforcement, to reform America's criminal justice system so that it protects and serves us all.

For comparison, here's what Obama said about Ferguson in a nationally-televised press conference on August 14, just days after Brown's death:

It's important to remember how this started. We lost a young man, Michael Brown, in heartbreaking, tragic circumstances. When something like this happens, the local police have a responsibility to be open and transparent about how they're investigating and how they're working with communities...Emotions are raw in Ferguson, and there are passionate differences in how people look at how this happened. We're all part of one American family, united in common values, and that includes a belief in equality under the law, the right to peaceful protest, dignity for every man, woman and child among us, and accountability from our government.

The mere mention of Ferguson in the State of the Union wasn't enough for many of the protesters and activists who expected to hear more from a black president with two more years in office and, as Obama himself put it, no more campaigns to run.

Y'all said you was waiting form to mention Ferguson. Well, he mentioned it alright. next time be specific in your prayers!

People are seriously mad that we expected Obama to discuss the current unrest re: police brutality in the #SOTU. That blows my mind.

Deray McKesson, an activist who has been central to the protest movement, said he hoped the speech was a sign that more dialogue on race relations is to come.

It's not about getting a "shout out" in the SOTU. It's about the President of the United States acknowledging the depth of the unrest.

Obama marching in Selma soon is no small thing. And I'm hopeful that he'll confront race head-on then. It didn't happen in the SOTU.

Many people, especially Ferguson activists, also expected Obama to mention one of the key rallying cries from the protests, "Black Lives Matter," in the State of the Union. Obama didn't, but he came close:

"I want our actions to tell every child, in every neighborhood: your life matters," Obama said in the speech, "and we are as committed to improving your life chances as we are for our own kids."