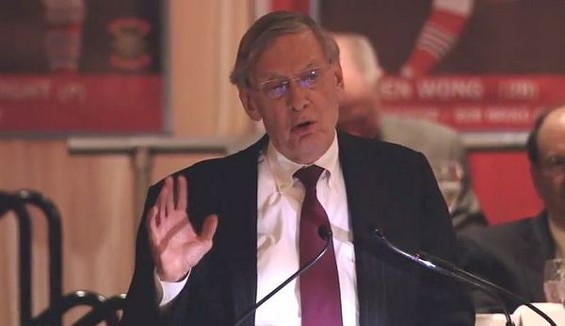 A week before stepping down from his post, Bud Selig, the outgoing commissioner of Major League Baseball, took a moment to praise the best baseball town in America: St. Louis.

Selig admitted that he's not supposed to say which MLB city is his favorite, but that didn't stop him from heralding the St. Louis Cardinals as "the blueprint" for all other professional sports teams.

Here's what he said Sunday at a dinner hosted by the St. Louis chapter of the Baseball Writers of America:

"With world championships, perennial contention, a pipeline of homegrown players, (a) beautiful ballpark (and) continuity on and off the field, the Redbirds embody the blueprint for every team, not only in baseball, but in sports," Selig said. "I commend (owner Bill DeWitt Jr.) and his entire organization for building an era of Cardinal baseball that is a fit reward for the St. Louis fans, whose unwavering support continues to amaze."

Then, Selig went off-book, looking up from his notes to address the crowd in St. Louis directly.

"I really -- I wanna say this," he began. "You know, I go to all 30 cities, obviously there's supposed to be a neutrality, but I've said this many times and I'm going to say it again: You are the best baseball town in America, and there is no doubt about it."

Eleven World Series wins and the best fans in baseball? No, Bud, there's no doubt about it.