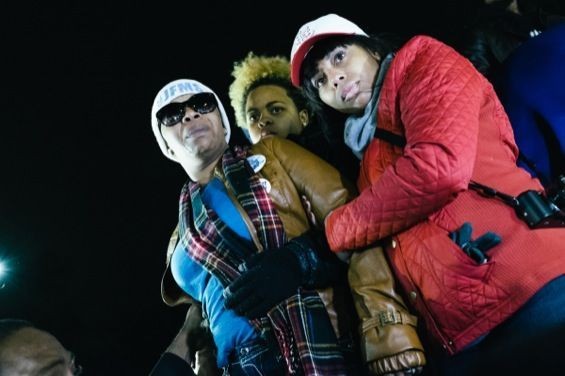 The report -- which is separate from a federal investigation into the Ferguson Police Department that found widespread and systematic racial discrimination -- says there's no evidence to disprove Wilson's statements that he shot Brown because he feared for his life. The report says witnesses who claimed Brown was surrendering to Wilson before being shot were not credible.

"Although some witnesses state that Brown held his hands up at shoulder level with his palms facing outward for a brief moment, these same witnesses describe Brown then dropping his hands and 'charging' at Wilson," the report says.

It continues, "Those witness accounts stating that Brown never moved back toward Wilson could not be relied upon in a prosecution because their accounts cannot be reconciled with the DNA bloodstain evidence and other credible witness accounts."

The U.S. Department of Justice is ready to close the case against former Ferguson Police officer Darren Wilson, according to the New York Times.

Citing anonymous law enforcement officials, the Times reports that neither the FBI nor federal prosecutors plan to press criminal or civil rights charges against Wilson, who fatally shot 18-year-old Michael Brown in August, touching off weeks of protest and unrest.

The FBI investigation into the shooting is complete and found no evidence to support charging Wilson with a crime, just as the local grand jury voted not to indict Wilson in November, according to the Times. Federal prosecutors have already started penning the legal memo clearing Wilson of civil rights charges.

The Times cites three law enforcement officials who spoke to reporters on condition of anonymity because the report is still incomplete. Attorney General Eric Holder and his top prosecutor have not formally made their final decision.

The Brown family's lawyer, Benjamin Crump, said he wouldn't comment on the investigation until results were officially released.

"We've heard speculation on cases before that didn't turn out to be true," Crump said to the Times. "It's too much to put the family through to respond to every rumor."

The civil rights investigation into the Ferguson Police Department is still open. Federal officials are looking into claims of discriminatory traffic stops and excessive force, and the investigation could lead to major changes for Ferguson, a majority-white department serving a predominantly black city.

Wilson resigned from the department in November.

"The evidence at this point does not support civil rights charges against Officer Wilson," said one person briefed on the investigation who spoke on the condition of anonymity to the Post because of the sensitivity of the case.