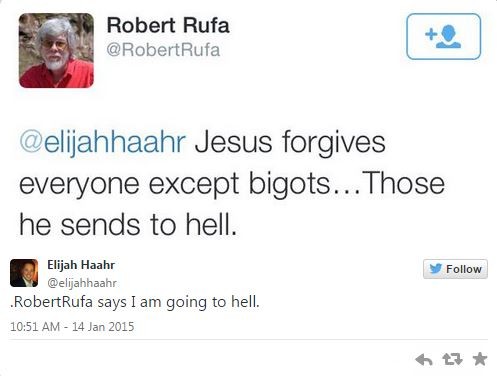 An avowed defender of religious liberty, Missouri State Representative Elija Haahr was shocked last week by an onslaught of mean tweets, emails and Facebook messages directed at his "Student Freedom of Association Act," which seeks to enshrine religion-based discrimination on college campuses.

To be fair, "mean" may be putting it too mildly.

"The level of discourse in politics has descended into the gutter," tweeted Haahr, seemingly fuming after receiving messages that accused him of being secretly gay, a Nazi or, simply, just an asshole. In response, Haahr took a lesson from troll-shaming websites and began re-posting the nastiness, writing that "It's time to shine the light on those who send vile, nasty threats."

The anger at Haahr revolves around HB 104, a bill that would prevent public universities from withholding benefits and recognition from student associations "based on the association's requirement that its leaders or members adhere to the association's sincerely held religious beliefs."

Like other pieces of legislation proposed under the banner of "religious liberty," Haahr's bill has received criticism that it will allow religious groups (read: Christians) to nab university funding while banning non-believers (read: gays) from joining or holding office in those organizations.

However, other opponents let fly with trollish, personal attacks on Haahr.

This was the first email I received. Explicit so read at your own risk. pic.twitter.com/tqZ1Xq0ziI

This email calls me a nazi and an...well, you can read it. pic.twitter.com/u0cZiIMBbl

Art claims I am a member of the KKK. pic.twitter.com/9WJQ2mTYGG

A Jethro reference and an anti-catholic slur. pic.twitter.com/DjTRCn1EeZ

Definitely the worst one. Gabe says he will cheer when they cut my head off. #Intolerant pic.twitter.com/d2MgNYZN0q

Granted, wishing for someone's swift beheading or accusing them of being a Nazi is nothing to cheer for. But there were also measured voices in the Twitterverse who expressed misgivings about the bill, particularly because it appears to value exclusionary religious beliefs over the rights of gays in Missouri, where -- by the way -- the law currently provides zero protection for employees fired for being LGBT.

"Sending nastygrams to @elijahhaahr (anyone) is not okay. Full stop," tweeted Sean Nicholson, executive director of progressive lobbying organization Progress Missouri. However, after Haahr defended the legality of the bill by mentioning a remarkably similar law passed last year in Oaklahoma, Nicholson retorted that "discrimination isn't okay, no matter what other states do."

@elijahhaahr @eyokley Discrimination isn't okay, no matter what other states do