St. Louis Finally Gets Added to Cities Getting Free Selma Tickets for Students 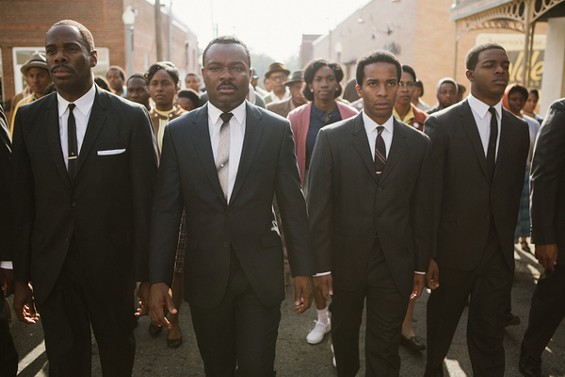 The Selma Students program started in New York, where 27 black business leaders offered to pay for tickets for 27,000 7th, 8th and 9th grade students in early January. The program became so popular that it sold out after expanding to 75,000 student tickets. As the program gained traction, Paramount Pictures expanded it to several other cities, including Boston, Dallas, Chicago and Nashville.

But not St. Louis.

That seemed a little weird to us at Daily RFT. After all, the protests in Ferguson after the fatal shooting of a black teen by a white police officer are often credited with reigniting the American civil rights movement.

The movie's Academy Award-nominated song "Glory," co-written by Common and John Legend, even makes reference to Ferguson in this lyric: "That's why Rosa sat on the bus / That's why we walk through Ferguson with our hands up."

Michael Lomax, president & CEO of the United Negro College Fund, says it best: "Selma is such an important film for young people to see now in the wake of Ferguson, Cleveland and New York. The struggle for justice is a long one, and Selma is history that a new generation needs to know more fully."

So Daily RFT called Paramount Pictures to find out what's up. Sure, we said, the message of the movie Selma resonates with students all over America, but where's the love for St. Louis?

Paramount Pictures responded by telling Daily RFT to hold our horses. The next day, they announced that thirteen more cities, including St. Louis, are added to the list.

How to Get Free Selma Tickets for Students

The Deaconess Foundation, a nonprofit that advocates for children in St. Louis, is coordinating the fundraising needed to pay for student tickets. As of Friday, the group had raised $42,000 toward its $50,000 goal with donations from Ford, Deaconess and the United Way of Greater St. Louis.

"It is important that St. Louis students are informed about this moment in history its connections to the challenges they face today," says Reverend Starsky Wilson, president & CEO of the Deaconess Foundation in St. Louis. "We believe this experience will nurture civic engagement among young people and give them hope that systemic change is possible through cooperative, intentional, and well-planned efforts."