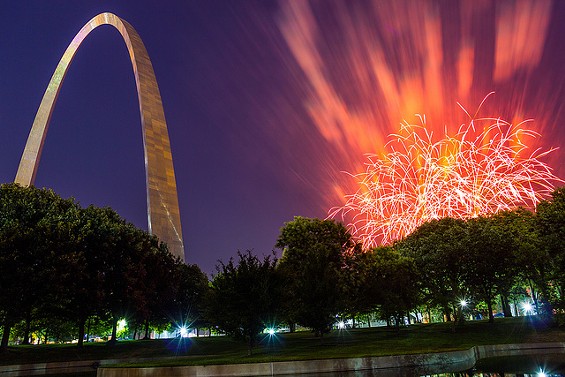 The battle is won, but the war is not over.

St. Louis and Kansas City are both hosting Startup Weekend EDU events later this month, where entrepreneurs turn their ideas into startups over 54 action-packed hours and compete to get funding. (Remember Invisible Girlfriend and Invisible Boyfriend? That was a Startup Weekend-winning idea.)

St. Louis' Startup Weekend EDU starts Friday, January 16, at the Cortex Innovation Community. And since Kansas City's is the weekend after, organizers thought they'd make the whole thing a little more interesting by introducing a wager: the city with the most attendees wins a sample of the loser city's best food, tickets to a professional indoor soccer match and, of course, bragging rights.

On Wednesday, Missouri's sister cities unleashed their sibling rivalry in a good ol' fashioned Twitter war. And while Daily RFT can admit we're biased in favor of the Lou, it's obvious to anyone and everyone that St. Louis totally won.

Here's how the I-70 series went down:

Kansas City kicked things off with an impressive ode to the upcoming competition, written in the style of 'Twas the Night Before Christmas:

Kansas City scrolled through Twitter all snug in their beds, while visions of StL toasted ravioli swirled in their heads; Whilst St. Louis dreamed of KC BBQ, a rib or a rack, tweeting furiously in an attempt to pick up the slack.

Kansas City tweeps were quick to mention how much they want to eat St. Louis' toasted ravioli. (Like everyone else in the world, right?) As the Twitter war began, St. Louis pounced.

@SWEDUKC Hmmm.... You guys seem pretty excited about getting toasted ravs. Looks like someone is a little jealous...

KC BBQ must be pretty terrible, why else would @SWEDUKC want to win so badly? #stl #toastedravs pic.twitter.com/IFGC54tLiL

Did you know @beyonce will move to #KCMO and call it her #bae if we have 100 signups for #kcswedu?? #QueenB #taketheCrown #literally

@SWEDUKC Whoa. Whoa. This just got real. #QueenB is hallowed ground. Not even touching that one. #ButKatyPerryDid #SuperBowl #ThrowNoShade

Kansas City fought back by revealing that they wish they were like St. Louis, a.k.a. the Gateway to the West.

Did you hear?? @SWEDUKC gets 100 signups in the next 24 hours, @Barack_Obama will officially make #KCMO #GatewayToTheWest instead of #StL

Sorry, KC, you may have Google Fiber, but we're keeping Nelly and the Arch.

Don't worry, Startup Weekend St. Louis. Riverfront Times can address this one. Kansas City can keep their hipster nonsense, and we'll take all of these: And there are 97 more here: The 100 Greatest St. Louis Songs Kansas City did get a pretty sweet shout-out from its mayor:

The first Startup Weekend for Education in #KC is coming! Build a startup in 54 hours! @SWEDUKC Register now: http://t.co/lX6DxjxHbb

St. Louis' mayor Francis Slay didn't jump into the I-70 Series Twitter war, but that's because he's busy running the No. 1 startup city in America:

See also: Popular Mechanics Names St. Louis the No. 1 Startup City in America And speaking of St. Louis' standing as the No. 1 startup city, the Twitter war ended on a unifying note: What if St. Louis and Kansas City stopped competing and started working together?

@SWEDUKC What if we combined our might and became the BEST STARTUP CITY ANYWHERE EVER? #East2West #StL #KC #Merger http://t.co/qWDJVOTqlQ