With 4,085 solar panels, the furniture retail giant will produce about 1,780,000 kilowatt-hours of electricity each year, offsetting the St. Louis store's carbon dioxide emissions by 1,227 tons, equivalent to the emissions of 258 cars.

The solar panel installation will be nearly three times as large as the 2,850-panel installation on top of the Kansas City-area store in Merriam, Kansas, which was the largest rooftop solar array in Kansas when it was built.

IKEA will start installing the 259,000-square-foot solar panel array on top of its 380,000 square-foot St. Louis store in spring and plans to finish before opening in fall 2015.

"We are excited about furthering our sustainability commitment with solar panels on the future St. Louis store," says CFO Rob Olson. "At IKEA, we have a mission to create a better everyday life for the many, and IKEA St. Louis can add to this goal with Missouri's largest rooftop solar array." 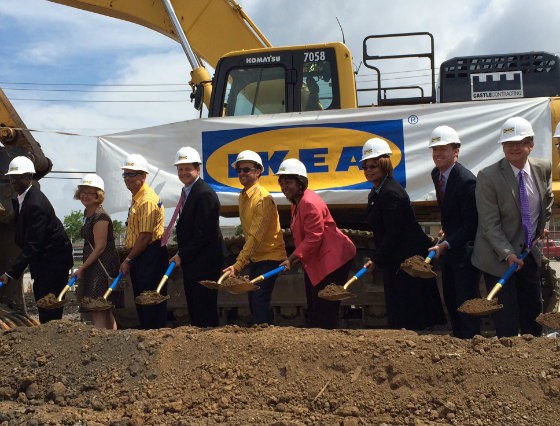 The solar power project is nothing new for IKEA, which cites its Swedish heritage as the motivation behind its eco-friendly business practices. Almost 90 percent of IKEA U.S. stores have solar panels, generating 40 megawatts per year. IKEA has also installed more than 700,000 solar panels on stores around the world and owns more than 150 wind turbines in Europe and Canada, with 104 more planned for the U.S.

St. Louis' IKEA store is still under construction on 21 acres at Interstate-64 and Vandeventer Avenue in the Cortex Innovation District. Until then, the nearest IKEA stores to St. Louis are in Chicago suburbs Bolingbrook and Schaumburg and in Merriam, Kansas.

Note: This article has been corrected to reflect that IKEA's solar array is the largest rooftop solar installation in Missouri.