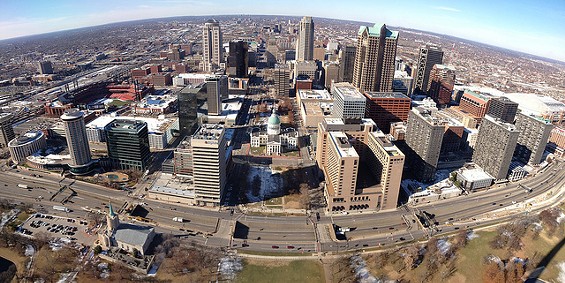 Move over, Brooklyn and San Francisco. The second wave of the startup economy is here, and St. Louis is leading the way.

"The city is a patchwork of parks, funky old neighborhoods, and grand stone homes, but now a current of commerce races beneath it," Popular Mechanics says about St. Louis. "The new business corridor starts at the riverfront and reaches eight miles west. In two years, when the Gateway Arch park renovation is finished, entrepreneurship, which gave St. Louis its start, will have long since jump-started its rebirth."

Like so many visitors to our fair city, Popular Mechanics was seduced by St. Louis' Gateway Arch, especially the $380 million plan to build a "resplendent park" linking downtown to the riverfront. From the article:

They are patching over roadways with parks and plazas that breathe the life of the river or harbor back into a city center. And the effort in St. Louis, which they call CityArchRiver 2015 and which will ultimately cost $380 million, comes at an opportune time for the city...Now this park -- this bridge over the highway -- is a symbol. A sign that construction of all kinds of things has returned, or is returning, or might return. An inspiration.

Blake Marggraff, a 22-year-old Washington University biology student, got $50,000 from Arch Grants, which has awarded $3.1 million to 55 startups, to launch his company BetaBox Mobile Prototyping Lab, which packages a work space with 3D printers, laser cutters and more into a shipping container.

"(St. Louis) is not the biggest scene. It is, however, extremely exciting, because it's one of the fastest accelerating," Marggraff tells Popular Mechanics.