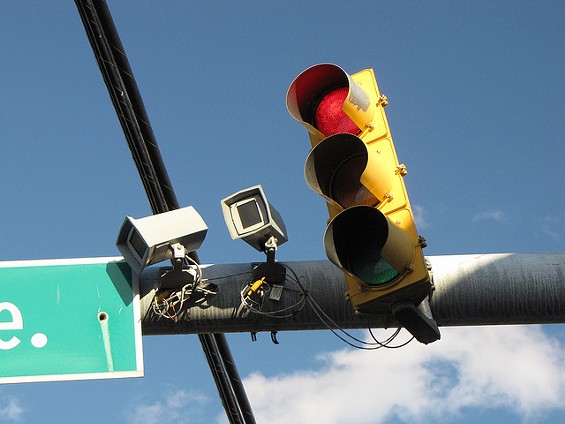 Red light cameras are still legal in Missouri, but a recent lawsuit settlement means drivers who paid fines for red light camera violations can now get a partial refund.

Almost 900,000 drivers are eligible for a 20 percent cash refund on payments from red light camera tickets in 27 Missouri municipalities.

The settlement says anyone who got a red light camera ticket in Missouri on or before November 21, 2014 and paid the fine can apply. Since tickets usually cost $100, the refund will be about $20.

There's one quirk for drivers who were ticketed by a St. Louis city red light camera. Because a judge temporarily halted the city's camera program in February (and then reinstated it with the promise that everyone will get their money back if the Missouri Supreme Court stops it permanently), St. Louis drivers are eligible for a refund on tickets issued on or before February 11, 2014.

See also: Red-Light Cameras Are Back On in St. Louis, With One Small Twist

St. Louis city is only one of the 27 municipalities with red light traffic cameras, including Arnold, Bel-Nor, Brentwood, Dellwood, Creve Coeur, Ellisville and Richmond Heights.

Missouri's Supreme Court is expected to rule on the legality of red light cameras once and for all. The case before the supreme court, Tupper v. the City of St. Louis, comes from two women who were ticketed by red-light cameras but say they weren't driving the offending cars at the time.

The class action lawsuit responsible for these refunds argued that Missouri's red light camera programs violate state law and the state Constitution. American Traffic Solutions denies that its cameras are illegal but agreed to pay partial refunds on behalf of the 27 Missouri towns with red light cameras in a $16 million settlement.

The refund only applies to people who paid their fine for red light camera violations. If you haven't paid, you don't get a refund.

How to apply for a refund

If you are eligible, an independent claims administrator will mail you a postcard about how to claim your refund. Fair warning: if you've moved within the last four years, your postcard may be sent to your old address.

To claim your refund, you can fill out this online form or print and mail it to Missouri Red Light Camera Ordinance Litigation Settlement office at P.O. Box 1994, Faribault MN 55021-6190. (We've also attached the form to the bottom of this story.)

The deadline for submitting or mailing a claim application is February 28, 2015.

If you apply for a claim, you won't be able to sue American Traffic Solutions or cities with red light cameras over the legality of your ticket. If you want to exclude yourself from the settlement and preserve your right to sue, send a letter by mail with your name, address, telephone number and signature to Missouri Red Light Camera Ordinance Litigation Settlement office at P.O. Box 1994, Faribault MN 55021-6190.

Here's the form to fill out to apply for a refund: