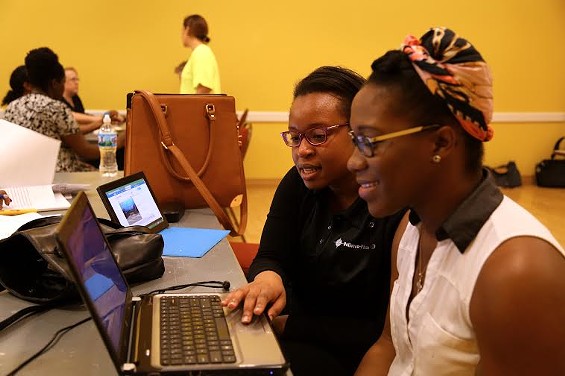 LaShana Lewis has the ambition, dedication and know-how to make it as a software engineer. But without a bachelor's degree, she had no chance of getting a job.

So when the money for Lewis' tuition at Michigan Technological University ran out, she came home to East St. Louis to look for a different career -- or at least a job to help her get by.

"I came back home with all of this computer knowledge but not a degree, and there was nothing for me to do," Lewis tells Daily RFT. "Most people were looking for secretaries, not for a black girl from East St. Louis to do coding."

Southern Illinois University-Edwardsville hired her to drive students from school to tutoring, though organizers eventually discovered her untapped skills and called her into the computer lab for help.

But Lewis knew she was capable of more.

"That's been my ambition is trying to get into the [computer programming] field, but that one thing was holding me back," Lewis says about not having a bachelor's degree.

All that changed when Lewis found CoderGirls.

The all-women coding meetup helped Lewis hone her skills and connected her to a programming apprenticeship with MasterCard.

LaShana & MasterCard from LaunchCode on Vimeo.

Two months later, in November, the company hired her to a full-time position fixing servers. It was exactly the kind of job recruiters had turned her down for just a week earlier because she doesn't have a degree.

"[MasterCard] sat me down and said, 'You know all this stuff?'" Lewis remembers. "And I'm like, 'Yeah, but I could never do anything with it.'"

On Wednesday, Lewis and other CoderGirl mentors are sharing their stories at a relaunch event aimed at introducing women of all ages, backgrounds and levels of coding expertise to this growing community of St. Louis women in technology. (Event details are below.)

"The tech industry is very male dominated, and we just want to create a space for women to feel comfortable coding and learning from other women," says Annie-Rose Fondaw, communications manager for CoderGirl. "Coding can be kind of daunting to people if they don't have any experience with it. We want to create a really welcoming space."

CoderGirl's partner is the women-centered, educational offshoot to LaunchCode, founded by Square co-founder and St. Louis native Jim McKelvey to bolster the city's lagging tech talent. LaunchCode connects wannabe coders to apprenticeships at major St. Louis companies (MasterCard, Enterprise) and startups with the goal of converting apprenticeships into full-time jobs for those who don't have the credentials to get hired otherwise. 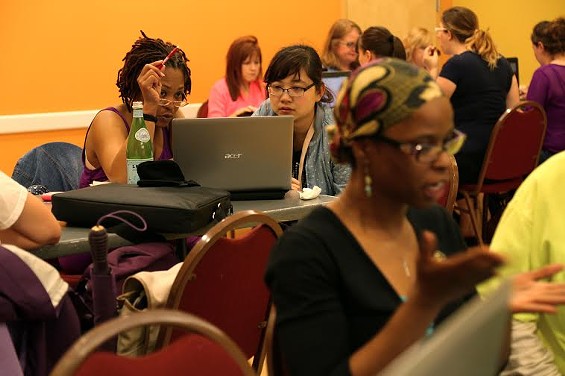 Lewis is the third CoderGirl member (and there's a fourth on her way) to land a full-time gig after joining the group.

"LaunchCode talked to me and went and talked to MasterCard and made that connection for me," Lewis says. "That got me in the door."

Lewis says CoderGirl isn't just for women who, like her, have a background in coding. CoderGirl works like a support network, guiding women of all expertise levels while they learn a new skill in a male-dominated field.

"Even if you're not necessarily talking to anyone, you still have the camaraderie, and that's something I missed a lot when I was coding and I was mostly around guys," Lewis says. While studying in Michigan, Lewis was the only woman and the only black person in her classes. "It's the energy, the energy of being around someone that's like you. It just feels better."

It runs from 6 to 8 p.m. Wednesday, January 14, at the Cortex Innovation Community at 4240 Duncan Avenue. Go to CoderGirl's website to RSVP and find out more.