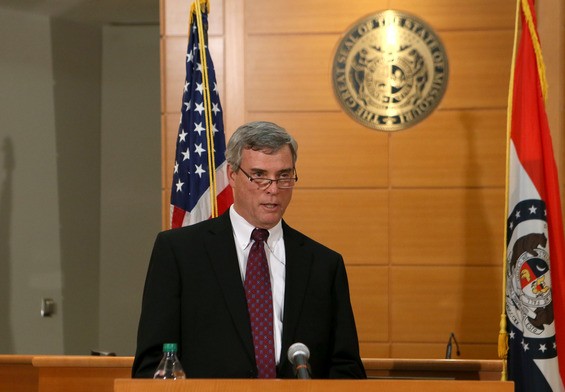 It's been an eventful start to 2015 for St. Louis County Prosecuting Attorney Bob McCulloch.

On Monday, aided by attorneys and a former judge, a group of seven citizens filed a formal bar complaint against McCulloch and his assistant prosecutors with the Office of the Chief Disciplinary Counsel in Jefferson City. The group alleges that a host of errors, oversights and shady tactics undermined -- and perhaps sabotaged -- the case to indict then-Ferguson officer Darren Wilson in the fatal August shooting of Michael Brown.

The eleven-page complaint (which you can read in full below) arrived the same day as a bombshell lawsuit from one of the actual grand jurors, who with the help from American Civil Liberties Union is fighting to lift the lifetime gag order on speaking publicly about grand jury proceedings.

The group's bar complaint reads like a highlight reel of previous concerns with the months-long grand jury investigation. It notes McCulloch and assistant prosecutors Kathi Alizadeh and Sheila Whirley called witnesses they knew to be lying while also failing to challenge Wilson's version of events when he took the stand to testify. The complaint paints a picture of a prosecution compromised by bias that, at times, "appears to go beyond incompetence and negligence and rises to a level of calculated contempt," according to the group.

"It just seems to me that what the appearance of all this is that all the prosecutors wanted somebody else to take the blame for making the decision not to prosecute," says St. Louis attorney Robert Ramsey, who partnered with former judge James Dowd to review the hundreds of pages of transcripts McCulloch released in the wake of the grand jury decision.

The effort to compile the complaint was led by criminal-justice reform advocate and The Ethics Project founder Christi Griffin, who told the Los Angeles Times, "We've reached a point where we have to demand accountability."

After reviewing transcripts, Ramsey says he was most troubled by a particular blunder from Alizadeh. She had initially provided the jurors with an outdated Missouri use of force statute found unconstitutional by the U.S. Supreme Court in 1985. The old statute permitted officers to shoot fleeing suspects in certain situations.

According to transcripts, Alizadeh did not inform the jury of the error until more than a month later, and when a juror asked if the Supreme Court decision overrode the Missouri statute, she answered, "As far as you need to know, just don't worry about that."

The implications of the error, as well as Alizadeh's back-and-forth with the curious juror, was widely publicized by MSNBC's Lawrence O'Donnell days after Wilson's non-indictment.

Ramsey says he's long had misgivings about using a grand jury to investigate criminal cases. Grand juries are governed by significantly different standards than a true trial and are not designed to determine guilt or innocence.

"It's only there to determine probable cause, to have the man charged, and then it's up to a court or regular jury," he says. " I think the institution as an investigative tool is obsolete and I've seen so many cases of it over the years being abused."

Update 5 p.m.: In a strange twist, it turns out that Christi Griffin, who signed the ethics complaint filed against McCulloch, had her own law license suspended for three years starting in 2007 by the Missouri Supreme Court.

The suspension came after the a disciplinary panel determined Griffin had acted improperly in profiting from a real estate transaction with an elderly client in bankruptcy.

Griffin told the St. Louis Post-Dispatch that she wasn't surprised that her past ethics violation would be brought up after signing her name to the ethics complaint against McCulloch, and that she hoped she could use the suspension to show that "corruption took place in the legal system."

That being said, Griffin maintains that she capably represented the client in question and in fact saved the client from foreclosure on her home.

"They tried to railroad me," she told the Post-Dispatch, describing what she characterized as misconduct on the part of the disciplinary panel.

Click through to the next page to read the full text of the complaint.