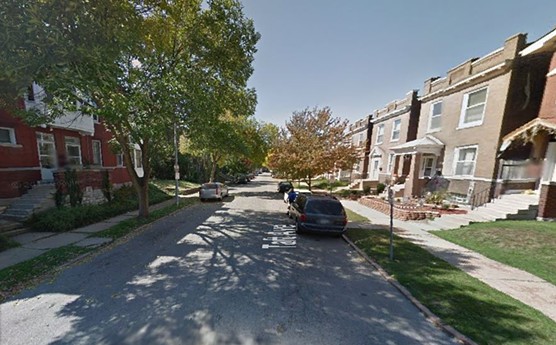 The third time's the charm -- at least when it comes to catching violent criminals.

St. Louis police arrested two men suspected of trying to shoot, kick and shatter their way into a residence in the 3200 block of Taft Avenue three back-to-back times on Monday. On the third attempt, the armed burglars shot a 36-year-old woman in the shoulder before officers arrived and chased them down.

It all started around 4:50 p.m., when the gunmen, a 21-year-old man and a 20-year-old man, started shooting at the woman and three teenagers at the home: a 19-year-old woman, a 16-year-old boy and a 16-year-old girl. After opening fire, the suspects tried to kick down the front door to the victims' residence, finally throwing bricks through the windows before running away to escape responding officers.

After the cops left, the persistent gunmen came back for a second attempt at breaking in. When that didn't work, they returned a third time around 6:37 p.m. and started shooting into the building and through the residence's damaged door, striking the woman in the shoulder.

The woman and teens managed to keep the armed burglars out of their residence, police said.

Arriving officers chased the gunmen down and arrested them in the 4500 block of Virginia Avenue, one block to the west.

The woman struck by a bullet was listed in stable condition at the hospital, police said.