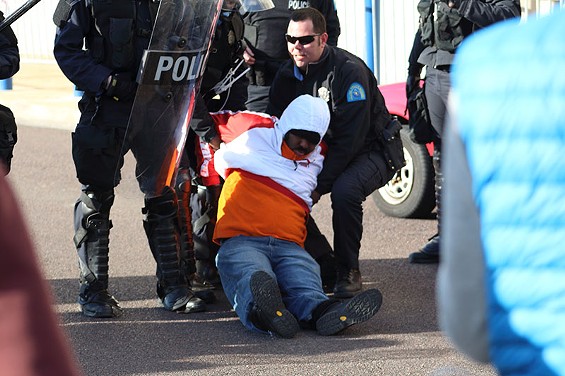 The anti-police brutality protests that started in Ferguson in August 2014 will only escalate in 2015, protester Kayla Reed promised during demonstrations on New Year's Eve.

"Just to let you know, it's the end of the year and we plan on going into 2015 a lot harder, a lot tougher," Reed told Daily RFT after protesters tried to occupy St. Louis Metropolitan Police headquarters Wednesday morning.

Five were arrested and several protesters and journalists were pepper-sprayed by cops Wednesday as protesters tried to serve police with an "eviction notice" signed by "We the people." Four of the people arrested were charged with trespassing and disturbance of the peace. One protester was charged with third-degree assault. 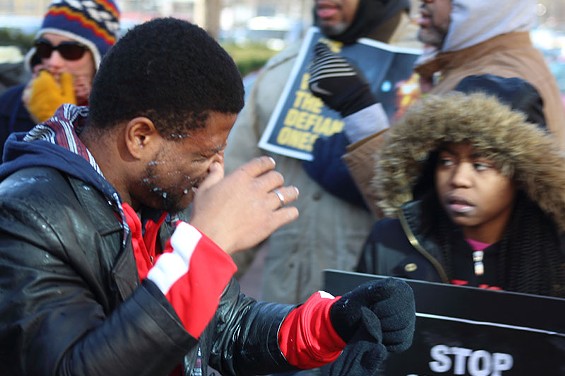 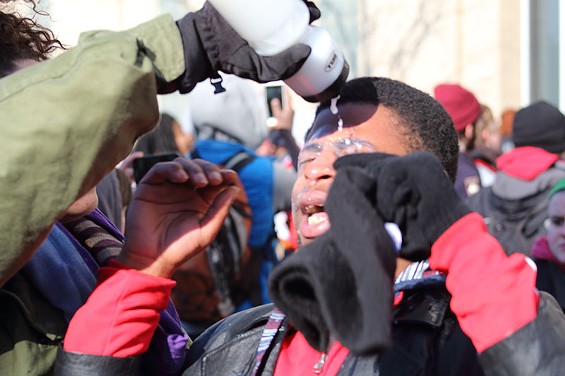 After about fifteen protesters managed to get inside the headquarters, police forced them back outside and blockaded the doors.

"This is our right to protest," said Delisa Allen, who joined protests Wednesday, "but obviously it's not our right as black individuals, which is something that's been reinforced time and time again, especially this year, that black lives really don't matter to them."

Allen says she is particularly offended to see black police officers trying to stop protests, though she says she's fighting "for their lives, too."

"They're killing your people," Allen tells Daily RFT about black police officers. "This is a genocide of black individuals in America. People will say it's not a genocide, but when you look up the definition of mass killings, every 28 hours one of us is dying. That's a genocide when we calculate it."

The action at the police station was the most dramatic protest on New Year's Eve, though a handful of demonstrators also targeted The Hyatt Regency's New Year's Eve blowout.

See more photos: Partying and Protests Ring in 2015 at the Hyatt Regency