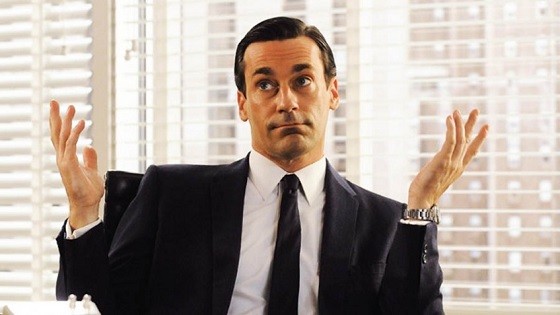 As the world media continues to associate St. Louis with police brutality, shootings, racism and violence, at least we have this devilishly handsome and golden voiced TV and film star to rep all that's good in the Lou.

Most recently, Hamm was promoting his hometown on the fifth annual Christmas special of popular podcast Doug Loves Movies, a live game show that tests comedians and actors on their movie knowledge.

As part of the game, contestants bring prizes for the winner. Hamm brought what he called "a St. Louis grab bag," including St. Louis flip flops, a Rams jersey, a Cardinals jersey (which he calls the "shirt of Jesus") and some Blues socks. (To hear this, skip ahead to 59:35.)

He also gave away one of the Jon Hamm bobbleheads the Cardinals made in his honor this year.

"If you need to relocate to St. Louis, you're set," joked the show's host and professional stoner Doug Benson.

"You will be welcomed with open arms -- and then shot," Hamm replied. When the crowd gets riled up over this reference to Ferguson, Hamm tried to calm everyone down. "I'm from there. It's OK, you guys."

Hamm grew up in Normandy close enough to Ferguson to ride his bike there.

"That's my neighborhood," Hamm told People Magazine in August after the fatal shooting of Michael Brown. "I know there's a lot more good people in those neighborhoods than there are bad people."

At the L.A. podcast taping, Hamm was trying to explain his St. Louis gifts when an audience member who, like so many jealous baseball fans, hates the eleven-time World Series winning St. Louis Cardinals booed Hamm for his Redbirds swag. Christmas may be a time for forgiveness, Hamm responds, but dissing his beloved Cardinals crosses the line.

"I don't forgive you for that," Hamm says.

Daily RFT won't spoil the rest of the game for you, but if you want to hear Hamm totally nerd out over the proper way to hold a lightsaber, fast-forward to 38:30.