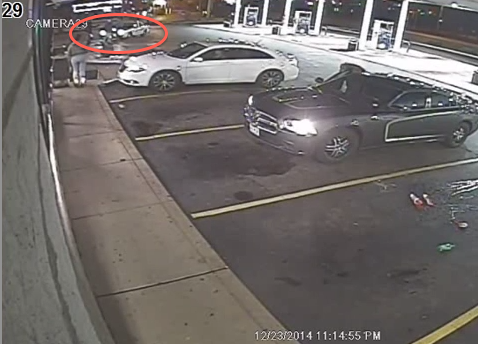 Police haven't named the eighteen-year-old victim of the shooting, but local sources, including the victim's mother, identified him as Antonio Martin.

Update: The St. Louis County Police Department confirms the identity: "The deceased from today's officer involved shooting in the City of Berkeley is Antonio Martin, 18 years of age, of the 6100 block of Sherry, St. Louis, MO 63136."

The fatal police shooting comes as St. Louis remains on edge after the August shooting of Michael Brown, a black eighteen-year-old killed by then-police officer Darren Wilson in the neighboring suburb of Ferguson. A grand jury declined to charge Wilson with a crime in November, touching off a wave of arson and looting down West Florissant Avenue that burned many businesses to the ground.

St. Louis County Police, who are investigating the shooting by the Berkeley officer, said the officer shot three rounds at Martin, striking him once, at about 11:15 p.m. at the Mobil gas station at 6800 N. Hanley Road. Police said the officer was responding to a report about a theft at the gas station when he saw two men on the side of the building.

Here's what happened next, according to St. Louis County police:

The Berkeley Police Officer exited his vehicle and approached the subjects when one of the men pulled a handgun and pointed it at the officer. Fearing for his life, the Berkeley Officer fired several shots, striking the subject, fatally wounding him. The second subject fled the scene.

Police released a surveillance video of the shooting:

After the shooting, a crowd of hundreds of people gathered in protest. Some threw bricks and bundled fireworks, injuring two officers, and police responded with riot gear and mace.

At a press conference the next morning, St. Louis County Police chief Jon Belmar said Martin did not fire back at police with the "defaced" 9mm pistol he was carrying. Martin had a criminal record, including three armed assaults and theft charges, and was "known" to police, Belmar said.

"Bad choices were made," Belmar said. "This individual could have complied with the officer. It didn't have to end with him approaching him with is arm extended and an 9mm pistol in his hand."

The officer, who remains unidentified and is on leave, did not have his body camera on.

The gas station is five miles away from where Michael Brown was shot and killed by police in August.

Berkeley, one of north St. Louis County's many small municipalities, has about 9,000 residents, according to 2010 census data. More than 80 percent of residents are black, and 14 percent are white. The town's mayor and members of the city council are black.

Update: Governor Jay Nixon's office released the following statement: "The events in Berkeley are a reminder that law enforcement officers have a difficult, and often dangerous, job in protecting themselves and law-abiding citizens."