After Performing for Peace in Israel, Circus Harmony Brings Message of Unity to Ferguson

Jessica Hentoff thought she was escaping violence when she and nine children in her Circus Harmony troupe returned to St. Louis from Israel last summer during the height of a violent conflict with Gaza.

Hentoff and the child performers had been safe in northern Israel from the bloodshed down south and spent their time promoting social change and unity through a circus called "Peace Through Pyramids. But things changed twelve days after the troupe came back home, when then-Ferguson police officer Darren Wilson shot and killed unarmed teen Michael Brown and peaceful protests devolved into arson, shootings and looting.

"Everybody's like, 'Oh, it's so dangerous in Israel,'" Hentoff tells Daily RFT. "And then we came home, and our office, my home is in Florissant. Then we were three miles from violence."

Now that the violence has died down, Hentoff says Ferguson needs Circus Harmony's peace-promoting shows as much as Israel did. Hentoff wants to use the same production Circus Harmony showcased in Israel to launch a new performing troupe in Ferguson.

"The problem in Ferguson, in Israel, everywhere where there's conflict is that there is an 'us' and an 'other,'" Hentoff says. "In circus, you don't have 'us' and 'other.' You have to work together. What matters is, 'If I stand on your shoulders, will you hold me? If I jump, will you catch me?'"

She says now more than ever, students in Ferguson need the self-confidence and cooperation skills that only circus can teach.

"We use circus art to promote social change," Hentoff says. "It's about trust and responsibility. It's about overcoming fear. And it's about joy."

Before current Circus Harmony performers start teaching Ferguson kids how to swing from the trapeze, contort and juggle, Hentoff wants them to bond over the conflict they've experienced, either in Israel, Ferguson or both. Then, Hentoff wants her current students to take charge of teaching the new class of Ferguson performers.

"The kids are more responsive to a lesson taught by a peer, especially an accomplished peer," Hentoff says. When Hentoff tells students what to do, "they're like, 'Yeah, yeah, yeah.' I'm an old white woman. But when a young teenager who looks like them and talks like them shows it to them, they're like, 'Whoa.'" 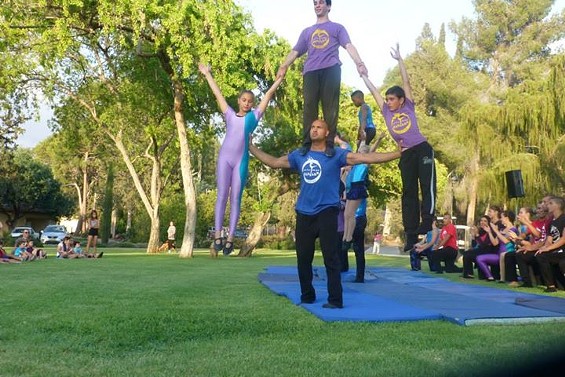 Funding for the new troop will come from a first-of-its-kind grant from the Regional Arts Commission, but Hentoff knows she'll need more funds for Ferguson students to continue classes.

"See the best, and then come and see the future best," Hentoff says.